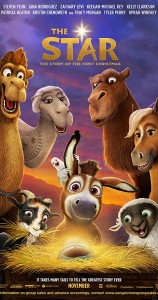 MOUNT HERMON, CA (ANS) – Christmas movies are common this time of year, and you’ve probably seen many.  But have you ever seen one about the first Christmas as experienced by … animals?

This fun and funny animated film-with-a-message follows Bo, a rambunctious young donkey, on his quest for freedom from the daily grind at a mill.  He escapes his bondage and teams up with Ruth the sheep and Dave the dove as they follow an unusual Star in the sky.  Along the way, their band grows to include three wisecracking camels, a goat, a cow, a mouse, and a slew of other creatures.

The Star leads them to a manger in Bethlehem, where they sense something significant and wonderful is about to happen involving a pregnant woman named Mary and her husband Joseph.

The list of celebrities voicing the animals and humans is what first grabbed my attention about this one.  Oprah Winfrey, Tyler Perry, and Tracy Morgan voice camels.  Kris Kristofferson voices a donkey, Kristin Chenoweth a mouse, Patricia Heaton a cow, and Oscar winner Christopher Plummer does King Herod.

God impregnates Mary, telling her she will give birth to the Messiah.  She explains this to Joseph, who is predictably perplexed, but remains with her.  A government census takes them to Bethlehem, where there is no room at the inn.  The couple retires to a stable.  When the child is born, they lay him in a manger.

But you knew all that.

The beauty of this film is capturing the emotion of very human moments – plus equine, canine, bovine, and a host of other creaturely moments – to help us sense what the actual players might have been feeling and thinking and how their stories might apply to our lives.

How would you feel if your fiancé/fiancée exhibited apparent evidence of sexual activity with someone else during your engagement?  Suppose your intended said that God had sanctioned the whole thing.  Would your trust and self-esteem take a nosedive?  Would you cancel the wedding?

Joseph, described as “a righteous man,” “… did not want to disgrace [Mary] publicly, so he decided to break the engagement quietly.”  But an angel appeared to him in a dream, explaining that the child in her was conceived by God, and told him to “name him Jesus, for he will save his people from their sins.”

The Star uses humor and grace to tenderly portray how Joseph might have reacted when he realized Mary was pregnant, and how the two resolved to become partners for life anyway.

Joseph’s continuing commitment to Mary and Jesus played a significant part in the boy’s birth and early childhood.  With divine help, the family overcame major obstacles.  And – as the film illustrates – so can your family.

Deborah the Camel (aka Oprah) gets my vote for best denouement line.  As creatures gaze on the infant, she muses, “You know, I think people are gonna remember this night.  What happened here around this manger will be celebrated for thousands of years.”  Though her dromedary pals scoff, I have a hunch she’s right.