THE WAR IS REAL

By Coach Dave Daubenmire
I cannot believe how many Christians cannot see what is going on. It continues to amaze me how blind they are to the reality of what is happening in the world. As usual, I believe the pastors are to blame for so much of this dumbing-down of America.

I heard a wise man say that American Christians are so heavenly minded that they are no earthly good. He makes a good point. I call it “compartmentalized Christianity;” the placing of God inside a box that we keep under our beds. We occasionally open the box whenever we feel like we need a little help from God, but for the most part we have no idea what is really going on in this natural world.

As I have written before, the Devil is real. He is not just a figment of our imagination or a make-believe character out of a make-believe bible. The Devil is real and he has an entire army of fallen angels under his command. To miss this fact is to completely misunderstand the events that are engulfing us now.

The Devil and his henchmen are not after you. Not in the miniscule sense that we have been led to believe by our pastors. Although his influence is strong and does contribute to messing up our lives, you are not the focus of the Devil. The Devil is after control…dominion…world conquest. The battle is so much larger than just our petty personal struggles.

The Scriptures are very clear. The eternal struggle between the “seed of the serpent and the seed of the woman” is a worldwide battle. The Devil isn’t merely after you; he is after control of the world. There are two “teams” on this battlefield. There are no “free agents.” You are either on Team Jesus or Team Satan. There are no spectators in this war.

So the Devil has kids, huh? I thought we were “all God’s children.” At least that is a refrain I hear often out of the mouth of Christians…but it’s not true. We are all “potentially” children of God, but unless you have been redeemed by the blood of Jesus then you are not a child of God—you are of YOUR father the Devil.

I used to be on the Devil’s team. Not on purpose mind you, but out of ignorance. The Devil had me tied in knots thinking I was free, but it wasn’t until I met Jesus that “the Truth” made me truly free. The Devil is real folks. He has many children, and they are unwittingly doing his bidding. 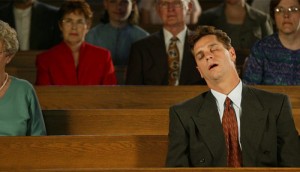 But we don’t understand the magnitude of the battle. We haven’t had our eyes opened to the reality that we are fighting against “evil spirits in high places.” The term “high places” refers to positions of authority. If you just take a few minutes to stop and look around, you will be able to see these Demonic forces hard at work in “high places.” Can you say the Supreme Court? Can you say Congress? Can you say the White House? Can you not see all of the “high places” that Satan is in control of? Sorry friends, but he isn’t just after little old you and me—he’s after total control…dominion…stealing from God everything that belongs to Him.

And the Devil is being pretty successful at it. Why? Well, because for the most part the children of God don’t even understand the nature of the war that is raging. While we go to church and play paddy-cake with the Devil, he is actually stealing and eating our lunch. The Devil and his children are in control of almost every major institution in America.

Remember, there is no middle ground. You either serve the Devil or you serve Jesus. There are no demilitarized zones.

So as the church continues to ignore the “high places” and abandons those positions of authority to the Devil’s kids, we whine and complain about the “war on Christianity.” Wake up Dude! This war has been going on for 6000 years. It is only recently that the church has abandoned the “gates” and permitted the Devil’s kids to rule and reign in every seat of authority.

The Devil is winning right now but he is really winning by forfeit. For the most part, Christians, and especially our pastors, have abandoned the field of play, the culture, for more heavenly, high-minded pursuits. They see the defense of the Biblical positions on abortion, marriage, and government tyranny as “worldly” and not worthy of their efforts.

Christians have yielded all of the gates and positions of authority to the Devil’s minions, and we are surprised when all things Christian come under assault. The Devil plays to win, while God’s children play to go to heaven.

Make no mistake about it; what happens in the culture affects who makes it to heaven. Satan’s primary weapons, lying and deceit, are leading millions down the road to perdition while the church sits silently inside of the stained-glass fortresses too heavenly minded to be of any earthly good.

Is God interested in what is going on in the world? Has Jesus washed His hands and surrendered to the forces of darkness? Is He no longer interested in seeing “thy Kingdom come THY WILL BE DONE IN EARTH as it is in heaven?”

The Devil has unleashed the powers of hell against the Gospel in these last days. God has not put us here to surrender to those dark forces, but rather to oppose them and extend God’s Kingdom and authority here on earth.

While the Christians play tiddlywinks inside the church, the Devil is outside “seeking whom he may devour.” Our Captain is bidding us to return to the field and “earnestly contend for the faith.” Whatever happens in the culture directly impacts the destiny of eternal souls. Don’t tell me you care about souls if you don’t care enough to get involved in fighting the evil that is all around us.

“Occupy till I return,” Jesus said. All that most Christians occupy is a padded pew in their church. It’s time to get off of our butts and fight.