(NaturalNews) Addiction to mobile devices is a growing problem in America. It’s gotten to the point where people are so distracted that they will walk right into traffic, fall off train platforms, or even fall right off a cliff.

As Americans plug their entire existence into their mobile devices, they give away the now, sacrificing the present moment, and sometimes sacrificing their lives.

Mobile devices have become the heart, mind and soul of a generation that is infatuated with distraction. Mobile devices are replacing the very spirit of the people, turning the masses into oblivious clones that will walk out into traffic without taking their eyes off their screens.

The devices have become a dark form of hypnosis, bringing people under a digital trance, as reality fades into the background. It’s almost as if Americans have given their souls to this meaningless state of nonstop digital existence. It’s almost as if the masses have undergone surgery, as if their hearts have been cut out and replaced with computer chips. Gone are the days of authentic connection and heart-based interaction. Eyes are glassed over now, sunken in, as retinas reflect the images of a digital world. 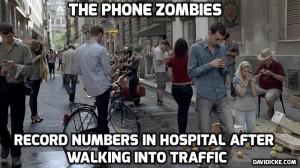 Distraction is what the masses crave, as the passion for freedom and authenticity fades into smoke. Gone are the days of authentic emotion and thought – family and friends engaging with one another around a blazing fire. The noises and lights of digital devices are drowning out the whispers of nature and the wisdom of silent nights. Their distraction holds people captive in a spiritual prison they cannot see, as they disconnect from the people sitting right next to them, walking right past them. …

“A lot of people don’t admit that they do it,” Dr. Claudette Lajam told CBS News. “It’s getting worse as we have more and more features on these devices that we carry around with us that can distract us.”

For the first time ever, the National Safety Council lists “distracted walking” as a significant cause of unintentional injury and death. Distracted walking injuries doubled between 2005 and 2010, with emergency room visits exceeding 1,500 in that time. Walking into traffic distracted by a mobile device made up 10 percent of pedestrian injuries.

The National Safety Council reports that 80 percent of emergency room visits are from falls caused by people distracted with their mobile devices. The most likely group of people to be injured are young adults between the ages of 21 and 25. Young adults are so distracted from reality, so caught up in the trance of mobile devices, that simply checking both ways before crossing a street slips their minds. More people are now dying young because they mindlessly walk into traffic with their heads craned over and their eyes buried in their mobile devices.