“And thou shalt put pure frankincense upon each row, that it may be on the bread for a memorial, even an offering made by fire unto Hashem.” Leviticus 24:7

Recetly, a Shabbat reenactment of a Temple ritual took place in the holy city of Hebron, giving participants a taste of the Temple service as it was in Biblical times while taking a practical step towards preparing for the Third Temple.

More than 80 participants were greeted in Hebron by the lighting of the Temple Menorah, lit by Shimshon Album and Rabbi Yaakov Hayman, the newly-elected chairman of the Temple Movement.

The lechem panim is unleavened bread, similar to the matzah eaten on Passover, and the 12 loaves are required by Biblical commandment to be on display inside the Temple sanctuary at all times. Cups of frankincense mixed with salt were placed on the bread. 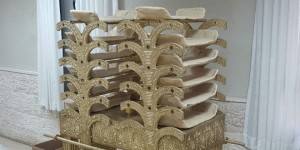 The 12 Shabbat showbreads, or “lechem panim”, on their special gold rack. (Courtesy Women of the Mikdash)

And thou shalt take fine flour, and bake twelve cakes thereof: two tenth deals shall be in one cake. Leviticus 24:5

In the times of the Temple, Kohanim (men of the Jewish priestly caste) were separated into family groups that came to Jerusalem to serve in the Temple one week out of every year. The incoming group of priests would arrive on Friday to begin their service on the Sabbath. On Saturday afternoon, the outgoing priests would remove the showbread that had been on display for a week, replacing it with newly-baked bread.

Every sabbath he shall set it in order before Hashem continually, being taken from B’nei Yisrael by an everlasting covenant. Leviticus 24:8 The two Kohen families would then join together in a meal, eating the lechem panim that had just been replaced.

The event was organized by the nascent Sanhedrin. Rabbi Hillel Weiss, spokesman for the Sanhedrin, explained why Hebron and not Jerusalem was chosen for the Temple-oriented event. “The first sacrifice ever brought by a Jew was when Abraham sacrificed a ram in place of Isaac, so the Temple service is actually rooted here, where the patriarchs are buried,” Rabbi Weiss explained to Breaking Israel News. 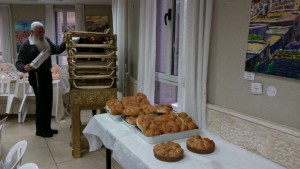 The Temple breads: “lechem panim” on the racks, and challot for Shabbat. (Courtesy Women of the Mikdash)

And Avraham lifted up his eyes, and looked, and behold behind him a ram caught in the thicket by his horns. And Avraham went and took the ram, and offered him up for a burnt-offering in the stead of his son. Genesis 22:13

“Before establishing his kingship and the foundations of the Temple in Jerusalem, King David was seven years in Hebron,” said Rabbi Weiss. “The seeds of the Messiah that will grow in Jerusalem and bring back the Temple service are planted here in Hebron.”

Tzipporet Chezi, a member of the Temple advocacy group Women of the Temple, organized the logistics. She explained that the event was not intended to commemorate the lost Temples, but to look to the future. “The ceremony was in preparation for the soon-to-be Third Temple,” she said.

Temple Movement chairman Rabbi Hayman explained why the group feels it is necessary to take steps towards building the Third Temple today.

“The Temple is not just a historical thing,” Rabbi Hayman said. “It brings peace to the world, and the world does not function properly without it.”