(WNS)–Rescue groups in Libya’s northwestern city of Sabratha said thousands of migrants have been trapped in the smuggling hub as rival militia groups battled for control since mid-September. Officials said the clashes began after Italy struck a deal with two militia groups to stem migrant flows.

The United Nations migration agency said rescue groups transferred at least 4,000 people, including pregnant women, newborn babies, and unaccompanied children, out of the city. Anti-ISIS Operation Room, created last year to clear Islamic State militants out of Sabratha, has taken control of the city, spokesman Saleh Graisia said. More than 90 people died and thousands others were displaced. Sadeeq Al-Jayash, head of the emergency committee in the city of Zuwara, said hundreds of migrants arrived there from Sabratha. “They came walking in groups,” Jayash told Reuters. “For example, there were various groups that came on Sunday—50, then 100, and 200 at night.” 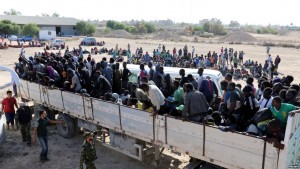 Sabratha served as the major departure point for migrants traveling across the Mediterranean Sea into Europe. Italy faced the highest number of migrants entering from Libya as many other European nations refused to accept them. The Italian government and Libya’s UN-backed Government of National Accord in July asked Libya’s clan-based militias to help block migrant boats at sea. Bashir Ibrahim, spokesman for the al-Ammu militia, said Italy provided the group with equipment, boats, and salaries. The tactic has worked to an extent: Migrant arrivals have dipped significantly in the past few months. But the deal triggered backlash from other local militias that grew into the latest Sabratha clashes, according to local officials.

UN High Commissioner for Human Rights Zeid Ra’ad al-Hussein last month warned that Europe’s strategy is “very thin on the protection of the human rights of migrants inside Libya and on the boats.” Ebrahim Deen, an analyst with the South Africa–based Afro–Middle East Center, said Italy’s tactic shows the country is willing to solve the migration crisis on its end with no regard for the atrocities in Libya.

“It shows the implementation of international laws is only adopted when it’s deemed in the interest of global powers,” Deen said. “Until these countries start looking at a Libya-centered approach, we’ll see these conflicts happen.”