Actor Tim Allen announced on Friday his popular sitcom “Last Man Standing” is returning to prime time television, but this time on the Fox Broadcasting Network.

Last May, ABC announced it was canceling the show after a successful six-season run.

Though it aired at 8 p.m. Friday nights on ABC, “Last Man Standing” pulled only slightly fewer viewers (8.1 million per episode) than the network’s top socially liberal, comedy Modern Family — airing at 8 p.m. on Wednesdays — which ABC did renew.

Many fans speculated on social media at the time that the decision to cancel “Last Man Standing” was politically motivated, due to Allen’s character, Mike Baxter, often expressing conservative views.

“‘Last Man Standing’ ended too soon and the outcry from the fans has been deafening,” said Gary Newman and Dana Walden, Chairmen and CEOs, Fox Television Group.

“We’ve wanted to put the show back together since its final taping a year ago, and Tim never gave up hope either,” he added. “Thanks to its millions of devoted viewers and the irrepressible Tim Allen, we haven’t seen the last of ‘Last Man Standing.’” 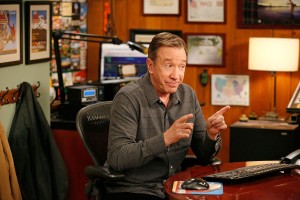 LAST MAN STANDING – “Take Me to Church” – Mike and Vanessa become increasingly worried their daughters don’t attend church anymore, so they decide to take it upon themselves to make church more interesting for everyone involved. When Ryan has Kyle as his guest on his podcast, they don’t expect their wives to hear their conversation, on “Last Man Standing,” airing FRIDAY, FEBRUARY 24 (8:00-8:31 p.m. EST), on the ABC Television Network. (Craig Sjodin/ABC via Getty Images)
TIM ALLEN

The show will pick up in Season 7 when it returns to prime time.

Allen was thrilled to hear the news, Variety reported. “Excited? Team ‘LMS’ was in the sixth inning, ahead by four runs, stands were packed and then for no reason, they call off the game,” Allen said. “It leaves you sitting in the dugout, holding a bat and puzzled.”

“Now we get the news from Fox that it’s time to get back out on that diamond — hell yes, I’m excited! When I heard the offer to create more episodes of ‘Last Man Standing,’ I did a fist pump so hard I threw my back out.”

Allen went on to credit the show’s fans for the program coming back on the air.

“I could not be more grateful for the fans who wrote petitions and kept up the passion and incredible support for the show,” the veteran actor said. “And a fist pump, ouch, for Dana Walden and Gary Newman at Fox for not only listening to the fans but for making the bold move to bring ‘Last Man Standing’ back.”

Appearing on “Jimmy Kimmel Live” in March 2017, just months before ABC canceled his show, Allen said it is dangerous to be politically conservative in Hollywood, as he recounted attending President Donald Trump’s inauguration.

“I’m not kidding. You gotta be real careful around here. You get beat up if you don’t believe what everybody believes,” Allen stated.