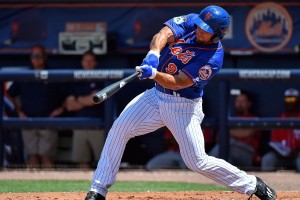 After hitting .273 with six home runs and 36 RBIs in 84 games for Double-A Binghamton in 2018 — a season that was cut short due to a broken hamate bone in his right hand — Tim Tebow will start 2019 with Triple-A Syracuse.

The announcement came Wednesday from the New York Mets general manager Brodie Van Wagenen, who recently joined the Mets after working at CAA Baseball, the agency that represents Tebow.

“Timmy is not a guy you want to put restraints on,” Van Wagenen said. “If he sees a block, he’s going to work that much harder to go overcome whatever somebody places on him. I believe in him.”

The 31-year-old outfielder, who had surgery on his hand in late July, has shown steady progress throughout the minor leagues despite not playing baseball since high school. He hit .301 in June for Binghamton and .340 in 15 games in July, and was named to the 2018 Eastern League All-Star Team. The 2007 Heisman Trophy winner and former NFL quarterback signed with the Mets in late 2016.

“Given the hamate injury he had last year, his momentum was stopped,” Van Wagenen said. “The goal is if he can pick that up in spring training and hopefully get off to a good start in Syracuse, then we’ll evaluate it when he’s ready.”

Tebow played in seven spring training games for the Mets in 2018, going 1-for-18.

It’s a wonder that Tebow is still able to manage a baseball career considering all the other projects he’s involved with. His latest book, “This Is The Day,” came out in September (his previous book, “Shaken,” was a New York Times bestseller and named the Evangelical Christian Publishers Association’s 2017 Book of the Year), his first movie as an executive producer will hit theaters this coming February, and he still works as a football analyst for ESPN’s SEC Nation in the fall.

And that’s all on top of living out his true passion with the Tim Tebow Foundation, whose mission is to “bring faith, hope and love to those needing a brighter day in their darkest hour of need.”

Should Tebow make it to the major leagues, he’d be the first athlete since Drew Henson to play in both the NFL and MLB. Henson suited up for the New York Yankees from 2002 to 2003, and as a quarterback for the Dallas Cowboys and Detroit Lions in 2004 and 2008.