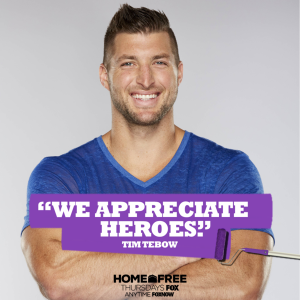 (Christian Post) – Tim Tebow is taking on hosting duties for the second season of Fox’s “Home Free,” and it is about more than just a job.

According to the Heisman-Trophy-winner-turned-motivational speaker, joining the home building competition allows the Christian athlete to highlight those who are changing lives.

“This show is filled with skill, will, strategy, competiveness, heart, so many amazing things. But I think the best thing that it’s bigger than the contestants,” Tebow said in an MRCTV report from Fox31 Denver. “They’re playing for something bigger than themselves and I think that’s pretty important. Just the selflessness of people to be able to change lives is pretty awesome.”

Tebow will join host Mike Holmes on the June 16 premiere of the Fox program where 11 contestants will build 11 houses to create the brand new neighborhood of Home Free Boulevard. While the contestants will be vying for $100,000, they are also working hard to win their personal hero a dream home.

“Every single one of them will get a home. You understand that each of them are playing for their personal heroes who have done amazing things,” Tebow explained. “One of our contestants was a war hero in Afghanistan and got blown up and the man he’s playing for was the person who came back in battle and picked him up and carried him off the battlefield and saved his life.”

He went on to explain why the featured heros deserved the houses that were being built for them. “Another one of our contestants is playing for a woman who randomly donated her kidney to his father when he was on dialysis…They really are real life heroes and they deserve to be celebrated,” he said