Tom Hanks: I Hope to Vote for Trump’s Re-Election

Hollywood royalty Tom Hanks honored President-elect Donald Trump in a recent speech, despite calling the Republican out for his controversial statements.

“We are going to be all right because we constantly get to tell the world who we are. We constantly get to define ourselves as American. We do have the greatest country in the world. We move at a slow pace. We have the greatest country in the world because we are always moving toward a more perfect union,” Hanks told a crowd gathered at the Museum of Modern Art. 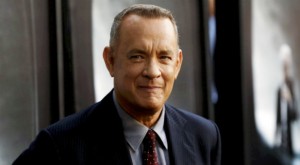 Rather than disparage the man America elected, Hanks continued: “I hope the president-elect does such a great job that I vote for his re-election in four years.”

Hanks’ remarks starkly contrast with other Hollywood celebrities who said they would leave the country if Trump won the presidency.  Cher, Miley Cyrus, Bryan Cranston, Samuel L. Jackson and Amy Schumer all vocalized their disdain for the real estate mogul, threatening to move unless Hillary Clinton took office.

Some, like Whoopi Goldberg and Shumer, say their comments were made in jest.