(WNS)–More than 200 children under the age of 14 died in the United States in 2014 after being struck by a car. Another 8,000 suffered injuries, according to the National Center for Statistics and Analysis.

A new research study conducted at the University of Iowa has determined children younger than 14 do not possess the cognitive skills and judgement to safely cross a street. The American Academy of Pediatrics (AAP) published an excerpt of the study in its Daily Briefing, a nod some physicians found ironic, given the organization’s support for transgender treatment.

“This same AAP, however, also frequently promotes the claim that children this age or younger are cognitively capable of deciding that they are the wrong sex,” noted Michelle Cretella, president of the American College of Pediatricians, a conservative alternative to the AAP. “Moreover, the AAP also deems children cognitively competent to consent to puberty blockers, toxic sex hormones, and mutilating sex reassignment surgery.” 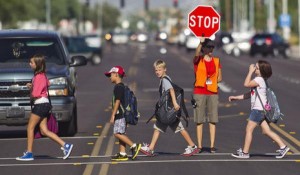 The Iowa researchers studied children between the ages of 6 and 14. The children engaged in a 3-D simulated activity in which they crossed a single lane of virtual traffic with approaching vehicles traveling 25 mph. Each child crossed the road 20 times. The results showed 6-year-olds got struck by vehicles an alarming 8 percent of the time, 8-year-olds 6 percent, 10-year-olds 5 percent, and 12-year-olds 2 percent.

“Some people think younger children may be able to perform like adults when crossing the street. Our study shows that’s not necessarily the case on busy roads where traffic doesn’t stop,” Jodie Plumert, a University of Iowa professor of psychology and brain sciences, said in a statement.

Cretella agreed, noting children are not “miniature adults.” But the AAP appears to only selectively heed research that documents how the cognitive limitations of children compromise their judgement and ability to provide informed consent, she said.

“Cognitive immaturity and impaired risk assessment during adolescence has always been recognized,” she said. “That’s why society has long had age restrictions not only for consenting to medical procedures, but also for driving, voting, joining the military, and purchasing alcohol and cigarettes.”

Professional recommendations for the treatment of transgender children often ignore their cognitive limitations. Norman Spack, a pediatric endocrinologist at Boston Children’s Hospital, believes doctors should give puberty blockers to even younger children. In a recent issue of the journal Endocrine News, he claimed the best age for boys is between 12 and 14, while girls should start between 10 and 12.

“Apparently, cognitive immaturity is an obstacle to crossing the street but not for giving consent to a sex change,” Cretella said. “Looks like ‘correctness’ outranks science when science gets in the way of agenda.”