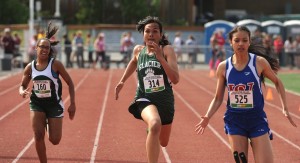 (NaturalNews) Controversy heated up in Anchorage, Alaska, recently when Haines High School senior sprinter Nattaphon Wangyot made history at the state track and field event as the first transgender to compete individually for a high school state championship.

The 18-year-old runner, who was born in Thailand as a male but identifies as a female, qualified and competed in the Class 3A girls’ sprints, capturing third place in the 200-meter preliminaries and fifth place in the 100-meter.

Earlier this year, the Alaska School Activities Association (ASAA) adopted a policy allowing schools and school districts to make up their own rules regarding transgender athletes. According to the Chilkat Valley News, the Haines Borough School District policy allows transgenders to compete in district programs and activities as the gender they identify with.

“Everybody doesn’t understand, and that’s OK,” said principal Martin. “But you still have to show respect, and we work together and we talk about things and we try to make it respectful for everybody.”

Fair play or not?

Just days before the state track and field race, Jim Minnery, president of the Alaska Family Action, and a dozen other supporters protested against Wangyot’s participation.

“We are here today as a voice from the community to ensure that female athletes are not denied the playing opportunities and scholarships otherwise available to them and to make the playing field even again,” Minnery told the Alaska Dispatch News. “Allowing students to play on teams of the opposite sex disproportionately impacts female students, who will lose spots on a track, soccer and volleyball teams to male students who identify as female.”

Saskia Harrison of Hutchison High School in Fairbanks, who just missed out on qualifying for the finals, said that it was competitively unfair that Wangyot was allowed to compete on the girls’ side.

“I’m glad that this person is comfortable with who they are and they’re able to be happy in who they are, but I don’t think it’s competitively completely 100-percent fair,” Harrison told KTVA.

Males have a competitive advantage

Should Wangyot participate as a girl? The opinions are mixed. Wangyot claims to take female hormones and other drugs that suppress testosterone production, taking away the competitive advantage boys have.

However, opponents to Wangyot’s participation are not so sure that hormone therapy evens out any athletic advantage. According to the New American, boys are already exposed to high levels of testosterone in the womb, and their different chromosome configuration has an effect on their performance too.

Jennifer Van Pelt, the mother of a girl who lost the podium place to Wangyot, commented on the original news story that she had no idea that her daughter was running against a male until the race was over. She further notes that men are physically different to females, leaving her girl at a major disadvantage.

“At our state track and field meet they award medals and a spot on the podium to the top 4. Allison placed 5th. We had no idea she was running against a male until after the race was over,” she told Rare News. “She was upset. How do you explain to her that not only does she need to train to beat her fellow female athletes now she should also train to beat the males? …

“I believe parents and athletes alike should be worried. Transgender males being allowed to compete in female events are being afforded an unfair advantage,” Van Pelt continued. “Males are physically different than females. That’s a scientific fact. Hormones and body modification cannot change that. Today it’s one transgender athlete. Tomorrow it could be half the field.”