True size of the fed swamp will blow your mind 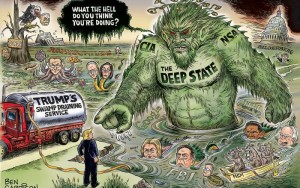 “Draining the swamp” has become synonymous with both the Trump campaign and his presidency. Although it’s not a new saying, it has stuck with him since he first uttered it.

The phrase was first made popular by President Ronald Reagan in 1983, who also said he came to Washington to “drain the swamp.” Reagan’s sentiment was identical to Trump’s in that regard. Reagan also wished to roll back the size and scope of the federal government.

It was used again in 2007 by Nancy Pelosi, when the Republicans imploded and were tossed out, leaving her to be elevated to speaker of the House. However, her sentiment was just slightly different. She claimed to want to “drain the swamp” of over 10 years of Republican control of the House.

But it appears, of the three, Donald Trump has already been the most successful. But his success could unfortunately be classified as a mere spit in the ocean. For as a new report chronicles, called “Mapping the Swamp,” the Washington, D.C., swamp is far more vast than even we conservatives imagined.

We who write and talk about this stuff report on the size of the bureaucratic state all the time, but to see the magnitude of the federal government laid out in black and white staggers the imagination.

Just the sheer size, in terms of employees, boggles the mind. At almost 2 million, the federal government employs more people than the combined populations of Alaska, Wyoming and Vermont.

And then there’s the cost – to us, the taxpayer. Open the Books, creators of “Mapping the Swamp”, calculated the cost to employ these “civil servants” at $136 billion per year. This, they calculate, is $1.1 million per minute, or $524 million per day. These figures are for the non-military workforce only, which makes it all that much more disheartening.

Civil service used to be something people did for the good of the community – thus the name civil service. I recall, many years ago, a friend told me he was moving from the private to the public sector. He explained that he wanted more job security for his family. He said he was willing to sacrifice private-sector pay for public security, benefits and time off.

Well, as “Mapping the Swamp” chronicles, those days have passed. No longer do people seek out civil-service jobs to be of service, nor sacrifice a thing. They do it to enrich themselves on the backs of taxpayers.

And, naturally, the Obama years saw the most dramatic increase in the enrichment of the public sector. Between 2010 and 2016, the number of federal employees making $200,000 or more increased by 165 percent, and those making over $150,000 grew by 60 percent.

Adding insult to injury, the department with the greatest number of top earners is the Department of Veterans Affairs – the V.A. The department that abuses and kills our American heroes is best compensated. That pretty much says it all.

I congratulate President Trump for his effort thus far to drain the swamp. However, no single man or any one administration will have the power or longevity to put a dent in the runaway bureaucratic state. It’s like trying to drain the Everglades with a drinking straw.