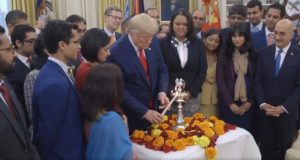 WASHINGTON — In carrying on a tradition that was reportedly started by then-President George W. Bush and continued by Barack Obama, President Trump again hosted a ceremonial lighting at the White House on Thursday in recognition of the Hindu Festival of Lights, known as Diwali. The holiday rings in the Hindu new year as adherents to the polytheistic religion commonly call upon the “gods” of wealth and wisdom to bring good fortune to the days ahead.

“As Diwali commences, @FLOTUS Melania and I wish those observing the Festival of Lights a blessed and happy celebration! #HappyDiwali,” Trump also tweeted. The post has received over 128,000 likes as of press time.

As previously reported, Diwali is an ancient festival originating in India, and is considered the largest shopping season in the Hindu religion. In addition to hanging lights and sharing legends and mythological stories about battles between good and evil, Hindus offer prayers to one or more of their deities—most commonly Lakshmi, the “goddess of wealth” and spouse of the mythical god Vishnu.

“Some believe that Lakshmi wanders the Earth looking for homes where she will be welcomed. People open their doors and windows and light lamps to invite Lakshmi in,” National Geographic outlines.

The festival lasts for five days, but the third day is the central day of the observance, which also recognizes Ganesh, “the elephant-headed god of wisdom.” Especially in India and Nepal, dogs and cows are celebrated as being sacred creatures, and are decorated with red dye and garlands of flowers.

“According to Hindu tradition, the dog is a messenger, believed to guard the gates of the afterlife. So on that second festival day, all dogs get special recognition and honor,” explains the site DogTime.

“In Hinduism, Gauhatya (killing of [a] cow) is considered as sin. During this day, Gai is worshiped by putting Tika on her forehead, flower garland around her neck and offering good meals,” the site Himalayan Glacier outlines. “People spray drops of Gaumutra (cow’s urine) to purify their body and home.”

“As Diwali commences, Melania and I wish those observing the Festival of Lights a blessed and happy celebration,” the White House posted in a statement on Friday. “For many Hindus, Jains, Sikhs, and Buddhists in the United States and around the globe, this sacred period is an opportunity to commemorate the victory of light over darkness, good over evil, and knowledge over ignorance. … We pray that this year’s observance brings love, joy, and eternal peace.”

As previously reported, Trump likewise lit the diya candle in the White House last year, recognizing those in his administration who have an Indian heritage.