Trump cracks down on alt-left violence (about time!) 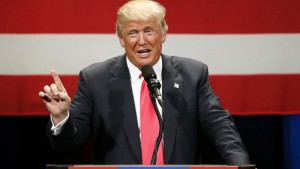 After eight years of an administration that hated the police and coddled protesters, it looks like President Donald Trump is finally cracking down on the alt-left’s violence. The Justice Department looks like it’s getting ready to pounce on left-wing protesters who injured cops earlier this year. Don’t you think it’s about time the ringleaders of these left-wing riots faced some consequences?

The DOJ has demanded all the records of a far-left website that stirred up violence at Trump’s inauguration on January 20. DisruptJ20 said it plotted to physically “disrupt” the peaceful transition of power from former President Barack Obama to Trump through a “diversity of tactics.”

When protesters finally got to D.C., we saw those “tactics” explode all over the city. Rioters beat up a chauffer before busting his limousine’s windows. They smashed the windows at any businesses that happened to be in the area. And they topped it off by throwing rocks at the police. Six police officers were injured by their violence.

When all was said and done, police arrested 230 people and have indicted 214 of them so far. But they wanted to get to the heart of it. Where did they learn about these tactics? From the website, according to the DOJ – and one look at their website makes it obvious why.

DisruptJ20’s website may as well be called “Violent Riots for Dummies.” Its front page links to an online pamphlet teaching rioters how to spray police in the eyes with spray paint. That could blind officers permanently. DisruptJ2- gave rioters in Ferguson an article titled, “In Defense of Looting.” The article tells anti-police thugs that looting is “one of the most righteous anti-white supremacist tactics available.” Even stealing liquor “still represents a material way that riots and protests help the community.” Malt liquor and 40 ouncers for justice!?

The worst part is the website peddles its hatred to children. It even expects them to get arrested and possibly gassed by police. Its “resources” page teaches protesters how to illegally blockade street intersections and “swarming tactics.” It tells them what to do when police try to break up the riot with tear gas.

And it tells team leaders to “know where people who are arrested” during its illegal actions “are likely to be taken” and “whether the person is a minor.” It even seems to tell these “leaders” that they might need to go on the lam. “In large actions” – that is, riots – “let office and/or coordinators know when you have to leave town.” Oh, black teenagers got tear gassed and arrested for doing what we told them to do? Sorry, I’m heading for the hills!

They pretend to be peaceful protesters, but their website reveals that to be a baldfaced lie. It states that one of their goals is “heightening (a) crisis.” Like the Obama administration said, “Never let a crisis go to waste.”

The Justice Department is demanding that the website’s host, DreamHost, turn over all the records of people who produced these materials, downloaded them, or subscribed to its feed. DreamHost says this is an overreach that threatens the First Amendment, the Constitution, the flag, motherhood, and apple pie.

Now, come on. Is instigating a riot covered by the First Amendment? Aren’t people accountable when they deliberately encourage physical acts of violence or lawbreaking? Shouldn’t they pay a price for teaching people how to permanently blind cops?

Trump thinks so. That’s one thing that sets him apart from Obama. Obama always sided against the police – in Ferguson, on the Trayvon Martin case. He said Massachusetts police “acted stupidly” for arresting a man who seemed to be breaking into a house.

He encouraged Black Lives Matter rioters, something that set off a round of assassinations of police officers. Obama’s closest advisors had been part of these mob actions over the years. This is his element.

Trump is telling the alt-left that there’s a new sheriff in town – and their reign of terror is over. Thank you, Mr. President.