Trump Effectively Puts Israel Back in the Driver’s Seat

To say that Israelis were glued to their televisions as Prime Minister Benjamin Netanyahu stood side-by-side with US President Donald Trump to address the media would be a major understatement.

For most Israelis, this first meeting between the two leaders since Trump was sworn in as the 45th president of the United States was enormously fateful. 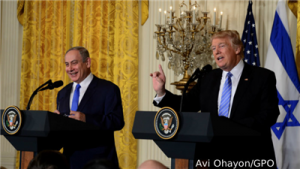 And most Israelis were beyond pleased with the outcome, and the drastic improvement over relations during the Obama Administration.

What most took away from the press conference was that Trump had effectively put Israel back in the driver’s seat when it comes to making peace in the Middle East.

No more will Washington dictate to the Jewish state and impose detrimental “solutions” that ultimately only serve American interests.

Unlike Obama, Trump recognizes Israel’s sovereignty and is prepared to deal with Netanyahu as an equal, not an underling.