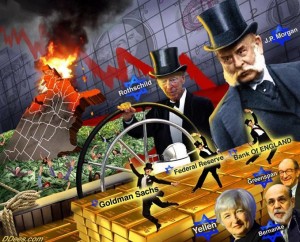 In Donald Trump’s first four years as president, he will not only choose three judges for the Supreme Court, he’ll also pick five of the seven members on the Fed Board of Governors. It would be impossible to overstate the effect this is going to have on the nation’s economic future. With both houses of Congress firmly in the GOP’s grip, we could see the most powerful central bank in the world transformed into a purely political institution that follows the diktats of one man.

Critics may think that is a vast improvement over the present situation in which the Fed conceals its allegiance to the giant Wall Street investment banks behind a public relations cloud of “independence”, but the idea of one man controlling the price of the world’s reserve currency and, thus, the price of financial assets and commodities across the globe, is equally disturbing. Already we have seen how the Fed’s determination to enrich its constituents has resulted in one titanic asset-price bubble after the other. Imagine if that power was entrusted to just one individual who could be tempted to use that authority to shape economic events in a way that enhanced and perpetuated his own political power. Even so, after seven years of a policy-induced Depression that has increased inequality to levels not seen since the Gilded Age, we think it is high-time that the president use his power to choose the members who will bring the bank back under government control. Here’s more background from the LA Times:

“Donald Trump leveled unprecedented criticism at the Federal Reserve during the campaign. As president, he could get to quickly reshape it … Trump will have the opportunity to appoint as many as five new members to the seven-person Fed Board of Governors during his first year and a half in office. That includes a new chairperson to replace Janet L. Yellen, whose term expires in early 2018…

Trump hammered Yellen in the final months of the (presidential) campaign, accusing her of keeping the benchmark rate “artificially low” to help fellow Democrats President Obama and Hillary Clinton.

“I think she is very political and to a certain extent, I think she should be ashamed of herself.” Trump told CNBC in mid-September. At the first presidential debate two weeks later, he declared that “the Fed is being more political than Hillary Clinton.”

And Trump’s final campaign video included images of the Fed and Yellen, casting her has part of the “political establishment” that has “bled our country dry.”…

“Never before have we had an incoming president not just criticize how Fed policy has been executed … but accuse the Fed chair of undermining the institution by being in political cahoots with his opponent and the White House,” (James) Pethokoukis said. “We’re off the grid into uncharted territory.”… (Trump hammered the Federal Reserve as a candidate. As president, he could quickly reshape it, LA Times)

We can safely assume that the Supreme Court is going to reflect Trump’s corporate-friendly laissez-faire attitude towards big business, the question is: What can we expect from the Central Bank once it becomes the White House’s flunky?

What do I mean by that?

I mean, that on the one hand, Trump is a big cheerleader for non-interventionist, free market capitalism, but on the other, he is a committed rightwing populist who seems to thrive on the support of the masses, which is clear when he things like this:

“You know who gets hurt the most (by Yellen’s easy money policies)? The people that went through 40 years of their life and saved a hundred dollars every week (in the bank)…..They worked all their lives to save and now what happens is they’re being forced into an inflated stock market and at some point they’ll get wiped out.”

So, how will Trump’s populism shape his views on who should or should not be a member of the Fed?

We don’t know, but we do know that monetary policy is going to change dramatically from the last eight years of unproductive experimentation because Trump has surrounded himself with industry leaders who ascribe to an entirely different philosophy than the one currently in practice. Check this out from monetary analyst Tommy Behnke:

“Some of today’s most reasonable mainstream economic voices are included in (Trump’s) inner circle. These names include David Malpass of Encima Global, who co-signed a letter with Jim Grant opposing the Fed’s “inflationary” and “distortive” quantitative easing program; John Paulson of Paulson & Co., who made billions from shorting the housing market before the Great Recession; Andy Beal, a self-described “libertarian kind of guy” who blames the Fed for the credit crisis; and the Heritage Foundation’s Stephen Moore, who told CSIN in 2012 that he is a “very severe critic” of the Fed’s “incredibly easy-money policies of the past decade.”

While none of Trump’s economic advisers are by any means Austrians, they are far more hawkish than most of Presidents Bush and Obama’s past economic advisers.” (Why President Trump Will Fumigate the Fed, Mises Institute)

Trump, who is no fan of the Fed’s bond buying program called QE, has admitted he thinks stocks are in a bubble suggesting that he will probably take a more conservative approach to monetary policy. Even so, that doesn’t change the fact he’s going to have to opportunity to personally select the FOMC’s ruling majority, which means that he’ll be in a position to demand their loyalty as a condition of their hiring. Does anyone seriously doubt that Trump would rather control the Fed himself than keep it in the clutches of the cutthroat Wall Street banks?

There’s no doubt that the distributional effects of the Fed’s policies helped catapult Trump into the White House. Millions of working class Americans who are sick of the monetary “trickle down” policies and the job-eviscerating trade agreements found a way to express their frustration in the candidacy of Donald Trump. Their collective rage suddenly exploded at the ballotbox on November 8 pushing the real estate tycoon to a victory over opponent Clinton in what many are calling the political upset of the century. Trump tapped into that wellspring of anger and frustration by denouncing the “failed and corrupt political establishment” in which both Hillary Clinton and the Fed feature prominently. Now he’s going to take it to the next level by launching a surprise attack on the Fed which will leave Wall Street stripped of its power-agency and left to fend for itself. This is a blurb from the New York Times:

“A core view of many Trump advisers is that the extended period of emergency policy settings has promoted a bubble in the stock market, depressed the incomes of savers, scared the public and encouraged capital misallocation,” said Ian Shepherdson, chief economist at Pantheon Macroeconomics. “Right now, these are minority views on the F.O.M.C., but Trump appointees are likely to shift the needle.” (With Trump in Power, the Fed Gets Ready for a Reckoning, New York Times)

They’re going to “shift the needle” alright, then they’re going to drive it through the serpent’s heart. The Fed has had every opportunity to show where its loyalties lie and it has sided with Wall Street every single time. There’s a reason why 95 percent of all income gains in the last eight years have gone to the one percent, while working people have struggled just to put food on the table. Just like there’s a reason why stocks have tripled in value in the last eight years while wages and incomes have stagnated and the economy has slowed to a crawl. It’s the policy, stupid.

The Fed has created the conditions for a permanent Depression so it can provide infinite cheap money to its crooked reprobate friends on Wall Street. Now their little party is coming to an end.