Trump to GOP: Doing nothing on healthcare isn’t an option

(WNS)–In a matter of days, Republican senators have flipped from plans to repeal and replace Obamacare, to repeal only, to wait and see what happens. President Donald Trump has just one message for them: Inaction isn’t an option.

Senate Majority Leader Mitch McConnell, R-Ky., found out early this week, even after significant tweaks, he didn’t have enough Republican votes to pass his Better Care Reconciliation Act (BCRA). He then tried to resurrect a 2015 bill to simply defund as much of the Affordable Care Act as possible. All but one Republican senator voted for it in the past but within hours, McConnell found it wouldn’t fly this time.

On Wednesday, 49 GOP senators visited the White House, where Trump urged them to follow through with their seven-year promise to repeal Obamacare. The caucus left galvanized to take action, but it’s unclear what that will look like.

At the beginning of the year, Trump entrusted lawmakers with a near impossible task: Create a healthcare system that provides more and better care, but make it cheaper for everyone. Oh, and do it without needing Democratic votes.

The president opened the meeting by reading a statement about all the good things he liked about BCRA and highlighting Obamacare’s failures.

“I’m ready to act,” Trump said, “For seven years you promised the American people that you would repeal Obamacare. People are hurting. Inaction is not an option, and frankly, I don’t think we should leave town unless we have a health insurance plan, unless we can give our people great healthcare.” 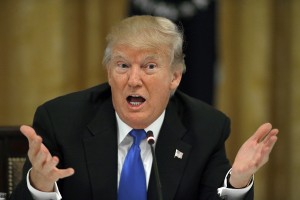 President Donald Trump speaks during a “Made in America,” roundtable event in the East Room of the White House, Wednesday, July 19, 2017, in Washington. (AP Photo/Alex Brandon)

After the meeting, McConnell announced he will stick with his plan to hold a vote on a motion to proceed with the 2015 repeal bill. Once lawmakers are “on the bill,” Republicans can offer amendments to assuage their concerns. But on Tuesday, three Republican senators—Shelley Moore Capito of West Virginia, Susan Collins of Maine, and Lisa Murkowski of Alaska—said they would vote against a motion to proceed, enough to sink the effort.

Making matters worse, Sen. John McCain’s cancer diagnosis leaves his return to the Senate in doubt, which means one less vote for McConnell.

Republicans left the White House confused about whether McConnell actually favored bringing up a bill he knows will fail or whether he has something else up his sleeve.

But Sen. Chuck Grassley, R-Iowa, told me confusion wasn’t the problem, it’s just that no one made a decision.

“It was not a place to make a decision,” he said. “Everybody expressed their views and various people threw out various versions of what ought to be done. No conclusion drawn.”

Republicans want different things. Most want to follow through with their campaign promise to repeal the Affordable Care Act, but some like parts of the law too much to nix the whole thing. And without seeking Democratic votes, Republicans can’t repeal the entire law anyway.

The 2015 bill McConnell wants to reconsider defunds most of Obamacare but retains many of its regulations. It repeals enough of the law to get far-right conservatives like Sen. Rand Paul, R-Ky., and Sen. Mike Lee, R-Utah, on board but fails to allay many moderate Republican concerns about not having a replacement ready to go.

“To just say ‘repeal and trust us, we’re going to fix it in a couple of years,’ that’s not going to provide comfort to the anxiety a lot of Alaskan families are feeling right now,” Murkowski told reporters this week.

Sen. Lamar Alexander, R-Tenn., told reporters on Wednesday he doubts the 2015 bill could even get to 40 votes at this point. He also announced this week, regardless of the vote outcome, his Committee on Health, Education, Labor, and Pensions would begin conducting public hearings on healthcare—something Democrats have requested for months.

When asked about the possibility of healthcare reform failing entirely, McConnell said he’d still have a positive message to offer voters.

“Well, we have a new Supreme Court justice,” he said. “We have 14 repeals of regulations, and we’re only six months in. Last time I looked, the Congress goes on for two years.”