A partially fossilized triceratops horn offers evidence the animal lived less than 65 million years ago, say scientists who discovered it 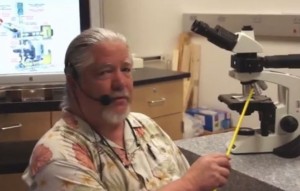 (WNS)–A few miles outside Glendive, Montana, on May 12, 2012, the sun beat down on three researchers as they hammered away at sandstone. They were hunting fossils scattered in the Hell Creek Formation, a geological trove for dinosaur bones. They had no power tools—just chisels, muscle, and the excitement of watching a large triceratops horn emerge inch-by-inch from sediment that swallowed it long ago.

The team spent three hours chipping away the rock. “That wears you out, especially for a bunch of old scientists,” recalled Kevin Anderson, a member of the team and a microbiology professor at Arkansas State University in Beebe, Ark. The Triceratops horridus horn they excavated was 2 feet long and weighed 20 pounds: “We always joked, this would have been the grandpa triceratops.”

After paying the landowner $3,000 for the fossil, the scientists hauled it to their lab to see if it contained any unfossilized soft tissue the ravages of time might have left untouched. After giving the fossil an acid bath that dissolved the hard material, they found—sure enough—soft tissue and structures that appeared to be original dinosaur cells.

In February 2013, Anderson and another member of the dig team, Mark Armitage, a part-time employee at California State University, Northridge, (CSUN) published their discovery in the journal Acta Histochemica. A few days afterward, CSUN dismissed Armitage from his job in the microscope lab, claiming it had inadequate funding to continue his position.

This week, the Pacific Justice Institute filed a religious discrimination lawsuit against the school on Armitage’s behalf. The organization claims the school fired Armitage because of his view that the Earth was created a few thousand years ago. Both Armitage and Anderson are affiliated with the Creation Research Society, a creation science organization based in Chino Valley, Ariz.

Pacific Justice Institute declined to make Armitage available for an interview because of the pending lawsuit, but Anderson, the co-author of the triceratops horn paper, spoke to me about the fossil discovery and its implications. While the Acta Histochemica paper doesn’t make any claim on the age of the fossil, Anderson said the preservation of soft tissue—absent a convincing explanation—suggests the horn is far less than 65 million years old, the approximate date that would be assigned to the triceratops based on a standard interpretation of the Hell Creek Formation.

This isn’t the first time scientists have found soft tissue inside a dinosaur fossil. In 2005, North Carolina State University researcher Mary Schweitzer famously reported her discovery of “transparent, flexible, hollow blood vessels” inside a Tyrannosaurus rex leg bone. Others have found soft tissue inside fossils from a mosasaur (an extinct marine reptile), a Brachylophosaurus (a duck-billed dinosaur), and a Tarbosaurus (a theropod).

Soft tissue has also emerged from triceratops bones, but Anderson and Armitage were the first to report the discovery of soft tissue within a triceratops horn—a structure presumably less likely than bone to preserve original tissue over a long period.

Once the two scientists had decalcified the fossil by submerging it in a mild acid for four weeks, they discovered, in 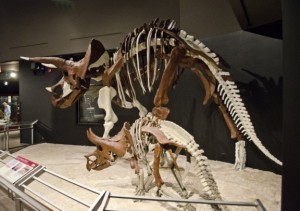 A Triceratops horridus adult and a juvenile of the same species, at the Museum of the Rockies in Bozeman, Mont.

the words of their report, “clear to milky-white or reddish brown pieces of soft material, which swayed gently upon bone surfaces when solutions were disturbed.” When Armitage examined the horn under a powerful scanning electron microscope, he saw structures appearing to be vessels that would have supplied blood to the horn, and even what may have been crystalized blood proteins. In addition, he found what appear to be osteocytes, cells involved in building and maintaining bone.

“These are real dinosaur tissues, loaded with real dinosaur cells,” Anderson said. “How is it they were preserved?” He believes the preservation of soft tissue challenges the assumption that the fossil is at least 65 million years old. According to the evolutionary timescale, triceratops lived at the end of the Cretaceous Period, which would have spanned 65 to 145 million years ago. “We have biological evidence that it’s not 65 million years,” Anderson said of his discovery.

Other scientists have recognized the quandary created by soft dinosaur tissue. In 2008, some researchers attempted to solve the problem by suggesting the soft tissue was not part of the original dinosaur, but a later “biofilm” formed by bacteria.

Anderson and Armitage explained in their paper why they thought the biofilm theory broke down on consideration. It is unclear, they wrote, “how such biofilm structures could themselves survive the ravages of time, as once produced other microorganisms could begin to digest even these.”

Other researchers have also been unconvinced by the biofilm explanation. Instead, they’ve proposed another solution: Last year, Schweitzer, who discovered the T. rex tissue, co-authored a paper in Proceedings of the Royal Society B suggesting the iron in hemoglobin molecules played a role in preserving the tissue for millions of years by producing a chemical effect similar to formaldehyde. Other than that, the paper admitted, “the persistence of original soft tissues in Mesozoic fossil bone is not explained by current chemical degradation models.”

As a test of the theory, Schweitzer submerged ostrich blood vessels in hemoglobin, and found it preserved them for more than two years.

Anderson says extrapolating a two-year laboratory study to 60 or 80 million years of deep time leaves “a lot of questions” unanswered. He remains unconvinced soft tissues could survive so much longer than the dinosaurs that produced them.

(WNS)–A scientist is suing California State University, Northridge (CSUN) for firing him after he publicized a discovery that suggests dinosaurs roamed America thousands of years ago, rather than the millions most evolutionists cite.

Mark Armitage, who specializes in microscopic evidence for a young earth, unexpectedly stumbled upon soft tissue in a triceratops fossil and wrote about his discovery for a scientific journal. Two weeks later, he was out of a job. Armitage filed suit against the university’s board of trustees on Tuesday, citing wrongful termination and religious discrimination.

Armitage’s fascination with microscopes and tiny creatures started as a teen when he spent a summer on a marine science station staring at tiny planktonic algae through double lenses. Since then, he’s founded a successful microscope sales and consulting company, patented an optical inspection device, and discovered two new parasites. He holds memberships in several national scientific societies, and also serves as a Creation Research Society board member.

In 2012, while at a world-famous fossil dig in Montana called Hell Creek Formation, Armitage uncovered the largest triceratops horn ever found at the site. To his surprise, he discovered soft tissue in the horn when he examined it under a high-powered microscope back at CSUN. Armitage believes the fact that the soft tissue wasn’t completely fossilized indicates dinosaurs roamed in the United States only thousands of years ago. Evolutionists claim dinosaurs went extinct more than 60 million years ago.

As the manager for the Electron and Confocal Microscopy Suite in the CSUN biology department, Armitage trained students to use the school’s high-powered microscopes. In the summer of 2012, while demonstrating one of the instruments, Armitage showed students the horn’s tissue samples and engaged them in “brief Socratic dialogue about the age of the horn,” according to the lawsuit. He believed the exchange was in keeping with leading students through the scientific method. A student reported the event to Armitage’s supervisor.

According to the suit, the supervisor stormed into the lab, shouting, “We are not going to tolerate your religion in this department!” and berating Armitage for his “creationist” views. Armitage informed the biology department chair and the head of technical services that what the supervisor said was a “clear example of religious discrimination.” Both of them assured Armitage his views would “not be a problem” and to “forget about the confrontation.” But they took no action to correct the supervisor or prevent future discrimination in the department, the suit claims.

Armitage published his findings in February 2013 with a peer-reviewed article for Acta Histochemica, a journal dedicated to the structural biochemistry of cells and tissues. His findings mirrored other recent discoveries of soft tissue in dinosaur bones. Two weeks later, CSUN fired Armitage, claiming his contract was temporary and the school lacked funding to continue the position.

On July 22, Pacific Justice Institute (PJI) filed a lawsuit in Los Angeles Superior Court on Armitage’s behalf, declaring he was fired due to his “perceived” religious views and, contrary to the school’s claim, his position was not temporary nor was funding an issue in the department. Armitage’s contract defined his position as “permanent part-time” and he was enrolled in the university’s benefits package. On the job for three years, he held progressively increasing responsibilities, received numerous commendations from co-workers and supervisors, and was told by his supervisor via email there were “big plans” to increase his lab, “complete with it’s own building(!)”

The lawsuit accuses the University of violating the Fair Employment and Housing Act, as well as Armitage’s First Amendment right to free speech and his academic freedom. A CSUN spokeswoman said on Thursday she couldn’t comment on the lawsuit because the school hadn’t been served.

“Terminating an employee because of their religious views is completely inappropriate and illegal,” Brad Dacus, president of PJI, said in a press release. “But doing so in an attempt to silence scientific speech at a public university is even more alarming. This should be a wakeup call and warning to the entire world of academia.”