(WNS)–Turkey declared a three-month state of emergency July 21 and partially suspended the European Convention on Human Rights following a failed coup attempt. The past week has seen mass arrests, job losses, and other restrictions in the country as government officials continue to investigate the attempted overthrow.

The state of emergency, which Turkish President Recep Tayyip Erdogan proposed on July 20 and Parliament approved the following day, will allow the president and cabinet to bypass Parliament when drafting new laws and could make the Constitutional Court inactive while it lasts. The country’s officials have insisted it’s a necessary step in preserving the country’s stability. 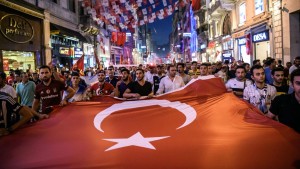 The coup attempt began the night of July 15 in the streets of Ankara, the country’s capital, and in Istanbul. After a night of explosions and gunfire, the country’s officials seized control and declared the coup a failure. The government has accused Fethullah Gulen, a self-exiled cleric now residing in Pennsylvania, for igniting the uprising and has called for his extradition. But U.S. Secretary of State John Kerry said Monday that Turkey must first provide concrete evidence Gulen spearheaded the coup.

“This is a state of emergency imposed not on the people, but on [the state] itself,” Turkey’s Prime Minister Binali Yildirim said. “We will, one by one, cleanse the state of (Gulen’s followers) and eliminate those who are trying to harm the country.”

Deputy Prime Minister Numan Kurtulmus said the country would suspend the human rights convention in accord with an article within the agreement that allows for such a move in times of emergencies. Kurtulmus tried to comfort concerned Turks by mentioning France made a similar emergency declaration and also suspended the convention following the November attack in Paris by Islamic State (ISIS).

But the country already had been enforcing tough measures prior to any of the new developments. Government officials have arrested nearly 10,000 people who range from security officials to academic staff. The government on Wednesday issued a travel ban on academic staff and shut down hundreds of schools. The same day, Turkey blocked access to the website WikiLeaks after it published thousands of emails from members of the ruling Justice and Development Party. As of today, some 58,881 civil service employees have been forced to resign or have had their licenses revoked.

Turkey’s state-run press, Anadolu Agency, reported government officials have arrested a soldier linked to the attack on a hotel where Erdogan was vacationing when the attempted coup began. Authorities have so far arrested about 30 soldiers who attacked the hotel minutes after Erdogan left.

In Greece, a court today sentenced Turkish military personnel who fled to the country during the attempted coup to two months in prison for illegal entry. The court suspended the sentence for three years, but the six pilots and two engineers have applied for political asylum. Turkey has demanded their return to face trial.

“We apologize for the inconvenience caused to the Greek state, but we acted without having any alternative,” the eight military employees said in a joint statement read by their lawyer. “We had no involvement in the attempted coup. We proudly serve in our country’s armed forces and are committed to democracy and human rights.”

The coup attempt left more than 230 people dead and more than 1,500 people injured. Yildirim said 20 of the coup plotters died in an exchange of fire.

Germany’s Foreign Minister Frank-Walter Steinmeier said in a statement the emergency declaration should not override the rule of law. Steinmeier asked Turkey to “keep the state of emergency only for the duration that it is absolutely necessary and then immediately end it.”