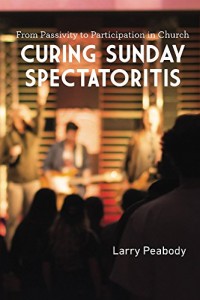 OLYMPIA, Wash. – How can church worship services be opened to congregational participation? That is the question Larry Peabody, author of ‘Curing Sunday Spectatoritis,’ posed to church leaders. In the book, 25 leaders describe a variety of ways they are turning spectators into participants during congregational meetings.

Peabody argues that typically both the church meeting space and the order of service press the body of Christ into audience mode. Church becomes theater. An overemphasis on platform performance creates passivity in the pew.

By contrast, he says, those in the New Testament church did not just consume. They contributed. When they met, Christians were able to encourage each other and to spur fellow believers on to love and good works. ‘Curing Sunday Spectatoritis’ shows how at least seven of the New Testament one-anothering instructions can be practiced during a Sunday service.

Centuries of church tradition, says Peabody, make it seem like sermons must be monologues. Yet that idea has no New Testament support. Fuller Seminary professor Charles Kraft has written, “I’m really impressed with how little Jesus monologued.” In ‘Curing Sunday Spectatoritis’ several pastors tell how they involve their congregations with dialogical preaching-in ways that preserve the integrity of biblical teaching while avoiding the pitfalls of a rambling talk-fest.

David W. Gill, who served as a professor in Gordon-Conwell Theological Seminary, says, “I can hardly wait to bring together a dozen of my pastor and church leader friends and colleagues to study, digest, debate, and apply the insights of Curing Sunday Spectatoritis for our own contexts. It is that good. Really.”

The book is available in both paperback and Kindle formats from Amazon.com.