(WNS)–After Alex Malarkey, the so-called “boy who went to heaven,”issued a public letter this week recanting his story, his publisher announced it will take the book based on his experience out of print.

Christian publisher Tyndale House confirmed the decision last night in a statement to The Washington Post. Lifeway, the Christian retailer owned by the Southern Baptist Convention, made a similar move earlier this week, agreeing to pull the book from its shelves at the request of Malarkey and his mother, Beth. 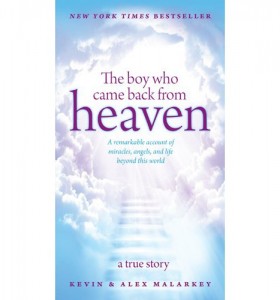 The Boy Who Came Back From Heaven was published in 2010 and claims to tell the true story of Alex Malarkey’s visit to heaven while in a coma following an accident that left him paralyzed from the neck down. He was 6 years old at the time. Malarkey’s father, Kevin, wrote the book and shares a byline with his son, who is now 16 years old.

In his brief letter, posted on the Pulpit and Pen, Alex Malarkey said he made his claims about heaven because he wanted to get attention.

“I did not die,”he wrote. “I did not go to Heaven.…People have profited from lies, and continue to. They should read the Bible, which is enough. The Bible is the only source of truth. Anything written by man cannot be infallible.”

In April, Beth Malarkey wrote a post on her blog detailing what she described as problems with the book and her son’s opposition to having his name continue to be associated with something he knew wasn’t true. Her appeals aren’t new—she said she’s been trying to get the book pulled from shelves since 2012—but only gained attention this week after her son issued his letter.

“Alex’s name and identity are being used against his wishes… on something that he is opposed to and knows to be in error according to the Bible,”Beth Malarkey wrote. “How can this be going on??? Great question. …How did it get this far?…[A]nother great question. …Sometimes bits of truth can become so twisted and distorted that it seems impossible to straighten out.”

The mother and son lay blame for the book with the people who are “profiting” from the story. But neither are specific about who that is. Beth Malarkey claims her son has not received any money from the book. But she also seems to take some of the blame for what happened, without offering specifics in the role she played in having the book published in the first place. She also makes no mention of her husband and where he stands on the book that bears his name.

“What I have walked through with Alex over the past nine years has nearly broken me personally and spiritually,” she wrote. “I have wept so deeply for what I have watched my children go through, been made aware of how ignorant I was of some things, how selfish I was, and how biblically illiterate I was, which allowed me to be deceived!”