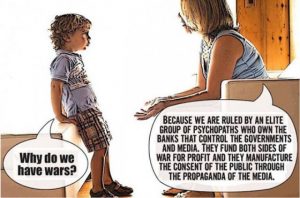 What does this tell us about our culture?

“Information Clearing House” – American taxpayers have spent $6.4 trillion on post-9/11 wars and military action in the Middle East and Asia, according to a new study. The report comes as the Trump administration works to withdraw the U.S. military presence from war-torn Syria.

The post-9/11 wars will continue to rise as the U.S. pays the on-going costs of veterans’ care and for interest on borrowing to pay for the wars,” In March, the Pentagon estimated that the wars in Afghanistan, Iraq and Syria have cost each taxpayer $7,623 through fiscal 2018.

The amount of money spent on these wars cannot fully convey their sheer wastefulness. Wars are always expensive, and they usually end up being much more expensive than anyone anticipates at the beginning, but when those wars are unnecessary and useless it makes the exorbitant cost that much more sickening. The money and resources expended on almost twenty years of failed wars could have been put to any number of more productive uses. Instead, that vast sum has been poured down the drain. As it is, the U.S. has little or nothing to show for the massive malinvestment that it has made in fighting these wars. These wars have not made the U.S. more secure, they have created more enemies than they destroyed, and they have set fires in their respective regions that will take years to burn out. As staggering as the $6.4 trillion figure is, it doesn’t capture how ruinous these wars have been. The U.S. will continue to pay for these wars long after they are over in more ways than one.

A full reckoning of the costs of our wars has to include the millions killed, displaced, and the wreckage of multiple countries. These are the truly senseless losses that could have been avoided. The report details these costs as well:

The death and destruction that our wars inflict on the people living in these countries are rarely mentioned in our foreign policy debates, and these losses are almost never taken into consideration when thinking about the costs of these wars. That encourages U.S. politicians and policymakers to take a very cavalier approach to supporting the use of force in other parts of the world, and it allows them to escape accountability for the harm that these policies cause.

For the last twenty years, there has been no limit on what the U.S. would spend on foreign wars, and Congress and presidents of both parties have reliably thrown more money at the Pentagon to sustain these unwinnable wars. While there might be occasional griping about “waste, fraud, and abuse,” there has been no serious, consistent effort to rein in these wars or the military budget. There has been even less interest in grappling with the horrific human costs of our militarized foreign policy. That has to change, and it starts with demanding that the U.S. end its failed and open-ended wars abroad.