When Jordan Payton nabbed a perfectly lofted pass for a 70-yard touchdown Nov. 1st to sink hopes for the University of Arizona, he knew who helped him.

“It’s all a credit to God,” said the UCLA wide receiver. “It’s a credit to everyone on the offensive staff to help me get that. It was amazing. It’s something you put in a lot of work for, you work so hard, and to score a touchdown in this game is hard to do,”

In the last three years, UCLA has stormed into national prominence with the re-engineering of its football program, and Payton, a widely-sought-after recruit, has been a critical part of the renaissance.

Payton is not the only member of the Bruin squad to partake in the pre-game and half-time practice of praying in the endzone, a custom that’s drawn sneers from unbelievers but remains a powerful testimony in front of tens of thousands. 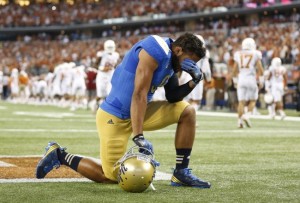 “Maybe about 90% of the team is Christian,” Payton said. “It’s a super-Christian team. We have chapel before games. We have a lot of one-on-one meetings with Christian mentors. It’s definitely a great thing to have a lot of Christian guys who believe in the same thing.”

A solid Christian since childhood, Payton grew up in the Lighthouse Church of Santa Monica and attended Lighthouse Church School, where he was grounded in solid biblical principles, before moving to Oaks Christian School of West Lake Village, CA, to catapult his football career.

Now in his junior year at UCLA, Jordan has racked up some impressive numbers this year. He’s had three 100-yard games (almost four). And his completions tend to be game-deciding. An astounding fake-and-run play-of-the-game marked the turning point against the Wildcats. After that, Arizona’s momentum sputtered completely.

Despite increased attention to his pigskin prowess, Payton remains humble in interviews. He’s careful to laud others, to downplay his own accomplishments and to side-step locker room squabbles.

After practice on Nov. 4, I asked Payton what Jesus means to him.

“He’s my rock, really,” he said. “As you saw, we do a prayer after the practice. I always make sure I’m always reading my Bible and that I’m staying locked-in with God and doing the right things to keep me focused.”

At one point, UCLA ‘s national ranking tumbled from seventh at the beginning of the season to 22nd, but Payton’s star has been continually rising. With seven touchdowns so far this season and 839 yards, player number nine is the top receiver for the Bruins.

“As of right now, it looks like I have pretty good projections for certain rounds,” he said. “So, Lord-willing that if I stay healthy, I’ll be able to play in the NFL. That’s the plan. That’s the hope. That’s the dream. You just keep going and grinding and just trying to get better really.”

While he’s a member of the Lighthouse Church, the intense practice-and-study schedule at UCLA has simply made it easier to attend worship service on campus provided by the Fellowship of Christian Athletes.

“I go to a little devotional here. It’s FCA based,” he said. “I just try to stay in the word and try to stay focused on God.”

Payton loves football, but it’s not his God.

Caption: UCLA Bruins receiver Jordan Payton (9) prays prior to the game against the Texas Longhorns at AT&T Stadium.