MOBILE, Ala. (BP) — The NFL’s first full-time female game official, Sarah Thomas, is a former University of Mobile athlete.  Thomas, who played basketball at UMobile from 1992-95, will be a line judge for the 2015 season. Based on performance, she will have the opportunity to move into other roles, including the highest position of referee.

The NFL made the formal announcement April 8, capping days of speculation by sports media outlets.

During Thomas’ three seasons with the Lady Rams, the team won 61 games, including two seasons with a 13-3 record in the Gulf Coast Athletic Conference. Thomas helped guide the 1992-93 team to a GCAC district championship and a berth in the NAIA National Championship tournament. She also was a two-time GCAC All-Academic selection. 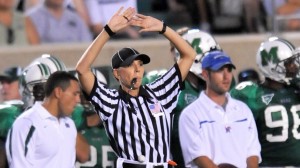 Martha Gore-Algernon, an assistant women’s basketball coach during Thomas’ UMobile playing career, praised her former player’s work ethic.  “I’m not surprised she’s made it this far,” Gore-Algernon said. “She didn’t set out to do this, but she just worked hard at it and they took notice of her. It couldn’t happen to a nicer person. She was a great player to coach.”

Having former athletes succeed in the professional sports world isn’t new for the University of Mobile.