A sewer worker who fell unconscious while cleaning a manhole in Umerkot, Pakistan, was rescued and brought to a government hospital, but the staff, observing the Islamic holy month of Ramadan refused to treat him because he was “unclean,” according to relatives.

Irfan Masih, 30, died Thursday according to the Pakistani Express Tribune. Masih was one of four sanitation workers who fainted while cleaning a manhole. The other three were brought to other hospitals. He died in the government hospital in front of doctors who were allegedly reluctant to treat him because Irfan was drenched in sewage sludge. 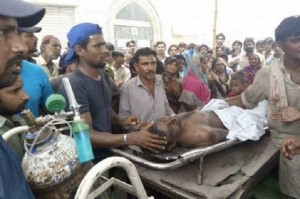 “The doctors refused to treat him because they were fasting and said my son was ‘napaak [unclean],’” claimed Irshad Masih, the mother of the deceased.

Pervez Masih, Irfan’s brother, said that he personally cleaned his brother’s body, after which the doctors sent an oxygen cylinder. “But the cylinder was empty,” he said. “And, before they could arrange another cylinder, he [Irfan] died.”

After Irfan breathed his last at the hospital, the family, community and locals staged a sit-in demonstration, along with the body, on the inter-district road connecting Umerkot to other parts of Sindh. The protest lasted for 10 hours before ending with assurances an inquiry would be conducted against the municipal authorities and doctors.

The protesting sanitary workers said that 60 daily wage workers are employed by the municipal committee in Umerkot. They alleged that the committee’s non-cadre officers Khalid Punjabi and Behari Lal compelled Irfan and others to work in the manhole without safety gear.

“They always threaten us with consequences of losing our jobs if we don’t obey their directives,” alleged Ghafoor Masih, a sanitary worker