The first video, which O’Keefe calls Part One of his ongoing series to expose foul play in the Clinton campaign, focuses on two political consultants who allegedly work behind the scenes to spark chaos at Trump events.

In the videos, Scott Foval, national field director at Americans United for Change, tells Veritas journalists with hidden cameras that he pays mentally ill people to cause a ruckus at Trump rallies with the intention of igniting a media firestorm. 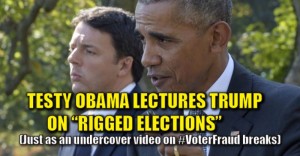 Foval says he recruits all across the country to orchestrate protests using a “script for engagement.” “Sometimes the crazies bite, and sometimes they don’t,” Foval says. “The key is initiating the confrontation by having leading conversations with people who are naturally psychotic.”

He explains he instructs protesters to start a confrontation in the lines outside to the rallies because they have less security and more cameras to capture what happens. Foval adds it’s not hard to get someone to “pop off” once they can get the right kind of recruits to attend. Confrontations can escalate by dressing recruits in Planned Parenthood T-shirts or having them yell, “Trump is a Nazi.” The goal is to agitate the crowd enough to get a Trump supporter to punch them, Foval says.

Foval admits he sometimes employs the homeless to do his bidding. O’Keefe calls Foval one of the Clinton campaign’s dark operatives. In the video, Foval says his work comes from contracts from the Democratic National Committee (DNC) and the Clinton campaign.

Foval apparently works underneath Bob Creamer, founder of Democracy Partners, a private political consulting company that has worked with Clinton, President Barack Obama, and the DNC in the past.

While on undercover tape, Creamer says wherever Trump and his running mate, Indiana Gov. Mike Pence, are, Democracy Partners will be, as well. “We have a whole team across the country that does that,” Creamer said.

“You can prove conspiracy if there’s a bus,” Foval says. He adds if voters drive individual cars, it’s much harder to prove they aren’t supposed to be there. Specifically, Foval highlights Indiana and Michigan as prime locations to ship in out-of-state voters.

Since the release of the videos, Foval no longer holds his position. Creamer said he will step back from his role at Democracy Partners.

Democracy Partners released a statement on its Facebook page this week denying the accusations. “Our firm has recently been the victim of a well-funded, systematic spy operation that is the modern day equivalent of the Watergate burglars,” it said. “The plot involved the use of trained operatives using false identifications, disguises, and elaborate false covers to infiltrate our firm and others in order to steal campaign plans and goad unsuspecting individuals into making careless statements on hidden cameras.”

The statement added Democracy Partners condemns all violence and election tampering in all their forms.

In March, a Trump event in Chicago ended after fights broke out between protesters and Trump supporters. Two police officers suffered injuries, and the video of Trump supporters throwing punches made waves on television networks. In the undercover videos, hired protesters from the Clinton campaign claim responsibility for instigating the altercation.

In 2010, O’Keefe was arrested for attempting to illegally record a senator. He was sentenced to probation and community service and had to pay a $1,500 fine.

During the last debate, Trump invited O’Keefe as one of his guests. After the debate, reporters asked Clinton to respond to O’Keefe’s videos. “I know nothing about this,” she said. “I can’t deal with every one of [O’Keefe’s] conspiracy theories.”