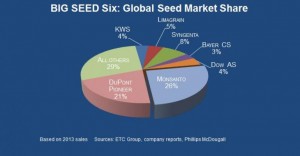 The U.S. Department of Justice (DOJ), overseen by Attorney General Jeff Sessions, is set to review $125 billion worth of proposed mega-mergers in the agribusiness sector, including deals between Bayer and Monsanto, Dow Chemical and DuPont and Syngenta and ChemChina.

That’s bad news for consumers, farmers and the environment.

A February 13, 2017, letter to Sessions, signed by nearly 325 farming, beekeeping, farmworker, religious, food safety, and conservation advocacy groups (including Organic Consumers Assoc.) says the trio of proposed mergers “are each problematic on their own, with many likely negative impacts on farmers, businesses, workers, and consumers. When taken together, they pose the threat of major oligopolistic outcomes in the industries of farming inputs, research, development, and technology.”

Will Sessions heed those warnings? Or will he bow to Trump, who following a recent meeting with the CEOs of Monsanto and Bayer, signaled a thumb up for the proposed mergers of two biotech giants?

Instead of handing over more power to agribusiness corporations whose sole raison d’être is to sell massive quantities of poisons, the DOJ should stand up for farmers and consumers, not chemical companies. The future of agriculture—American and international—lies in working with nature, not against it, and in providing support for local, independent farmers who employ regenerative practices that produce abundant, nutrient-dense, chemical-free food, and strengthen local economies and communities.