“This election raises significant concerns and questions of church polity and unity,” Bishop Bruce Ough, president of the UMC Council of Bishops, said after the vote. 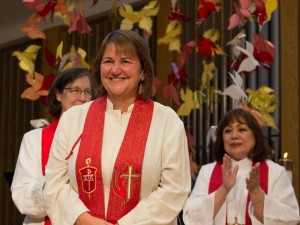 Immediately following the Western Jurisdiction’s election, the South Central Jurisdiction in Wichita, Kansas, asked for the church’s Judicial Council to review the decision. The leaders asked if electing a “self-avowed practicing homosexual” as a bishop was lawful under UMC doctrine. The election could now prompt review under church law.

The UMC is the largest mainline Protestant denomination in the United States and has yet to change its official statement on sexuality. The UMC Book of Discipline from 2012 states, “The practice of homosexuality is incompatible with Christian teaching. Therefore self-avowed practicing homosexuals are not to be certified as candidates, ordained as ministers, or appointed to serve in The United Methodist Church.”

Despite the official statement, the church itself is divided on the topic of same-sex marriage and ordination. Some fear a long-brewing church divide.

“If the Western Jurisdiction wanted to push the church to the brink of schism, they could not have found a more certain way of doing so,” said the Rev. Rob Renfroe, president of the Methodist magazine Good News.

The Western Jurisdiction has a history of disobedience to church rules, according to the Institute on Religion and Democracy. “This is a fundamentally schismatic action of the Western Jurisdiction declaring it no longer wants to live in unity with the rest of our denomination,” wrote John Lomperis, the institute’s UMC action director. “If [Oliveto] is no longer Methodist in belief, she would have more integrity to find another faith community, rather than breaking the promises she chose to make to us.”

United Methodist bishops are elected by five jurisdictional conferences, and any elder in good standing is eligible. Some argue sexual orientation should not disqualify someone from being in “good standing.”

Oliveto is a pastor at Glide Memorial Church in San Francisco, Calif. In 1964, Glide helped create the Council on Religion and the Homosexual, an organization intended to enlist religious leaders for LGBT advocacy. Oliveto has made headlines before for controversial behavior. In 2015, she made a statement she said was against Islamophobia by holding a sign saying, “We are all Muslims.” She has also supported abortion, publicly criticized the ministry of the Apostle Paul, and long officiated same-sex marriages.

Oliveto also was not the only openly gay minister nominated for a bishop’s post in the UMC this year. Two others, the Rev. David Meredith and the Rev. Frank Wulf, were also nominated in early June in other jurisdictions.

In recent years, many mainline Protestant denominations that once condemned same-sex wedding ceremonies and the ordination of gays have changed stances. The Presbyterian Church (USA), The Episcopal Church, and the Evangelical Lutheran Church in America have all voted to allow LGBT pastors and same-sex weddings.

Pressure to make the UMC alter its stance on same-sex marriage and ordination has increased since the Supreme Court’s landmark decision legalizing gay marriage last summer.

After the Methodist global meeting in May, reports spread that the denomination might ultimately divide; the UMC has discussed separating from more conservative churches in Africa and Asia.

Chris Ritter, pastor at Geneseo First United Methodist Church in Geneseo, Ill., wrote that everyone was to blame for the potential schism: “To frame what is happening as either a conservative takeover or a progressive temper-tantrum would be to both miss the point and wallow in the sort of self-indulgent blame-shifting that is so common in any divorce. … We leaders allowed the church to arrive at this place both by sins of commission and omission. In spite of some notable successes, we have poorly represented Jesus together.”