(NaturalNews) The results of a 2004 study by the U.S. Centers for Disease Control and Prevention (CDC) discovered a significant link between the MMR vaccine (measles, mumps and rubella) and autism in African American boys vaccinated under or around the age 36 months; however, if it weren’t for one whistleblower, you would not have been privy to any of this, because the evidence was deliberately covered up.

Dr. William Thompson, currently a senior scientist at the CDC, recently made a shocking admission that he and his colleagues specifically arranged a meeting to destroy important documents related to the study in an attempt to withhold information from the public regarding a link between the MMR vaccine and autism. 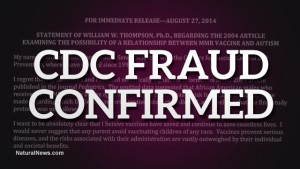 “The remaining four co-authors all met and brought a big garbage can into the meeting room, and reviewed and went through all the hardcopy documents that we had thought we should discard, and put them into a huge garbage can.”

However, aware that destroying documents in this manner was both illegal and unethical, Dr. Thompson kept hard copies of all the documents that had been disposed of, as well as maintained all associated computer files.

After securing a whistleblower attorney, Dr. Thompson came forward with his admission, providing relevant documents in August 2014 to the office of Rep. Bill Posey (R-Florida), who presented details of the cover-up on the floor of the U.S. House of Representatives.

Posey, who maintains that he is “pro-vaccine,” read the following quote by Dr. Thompson on the House floor:

My primary job duties while working in the immunization safety branch from 2000 to 2006, were to later co-lead three major vaccine safety studies. The MADDSP, MMR autism cases control study was being carried out in response to the Wakefield-Lancet study that suggested an association between the MMR vaccine and an autism-like health outcome. 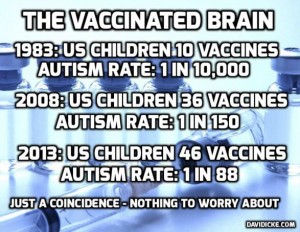 There were several major concerns among scientists and consumer advocates outside the CDC in the fall of 2000, regarding the execution of the Verstraeten Study. One of the important goals that was determined up front, in the spring of 2001, before any of these studies started, was to have all three protocols vetted outside the CDC prior to the start of the analyses so consumer advocates could not claim that we were presenting analyses that suited our own goals and biases.

We hypothesized that if we found statistically significant effects at either 18 or 36 month thresholds, we would conclude that vaccinating children early with MMR vaccine could lead to autism-like characteristics or features. We all met and finalized the study protocol and analysis plan. The goal was to not deviate from the analysis plan to avoid the debacle that occurred with the Verstraeten thimerosal study published in Pediatrics in 2003.

All the authors and I met and decided sometime between August and September 2002, not to report any race effects from the paper. Sometime soon after the meeting, we decided to exclude reporting any race effects.

The co-authors scheduled a meeting to destroy documents related to the study.

The remaining four co-authors all met and brought a big garbage can into the meeting room, and reviewed and went through all the hardcopy documents that we had thought we should discard, and put them into a huge garbage can.

However, because I assumed it was illegal and would violate both FOIA and DOJ requests, I kept hardcopies of all documents in my office, and I retain all associated computer files. I believe we intentionally withheld controversial findings from the final draft of the Pediatrics paper.
The CDC and Dr. Thompson’s co-author Dr. Frank DeStefano, CDC Director of Immunization Safety, continue to defend the study as originally published.

So far, no hearings scheduled and no known inquiry of the alleged scientific misconduct.