Vatican Fake News – “The Reformation is Over” 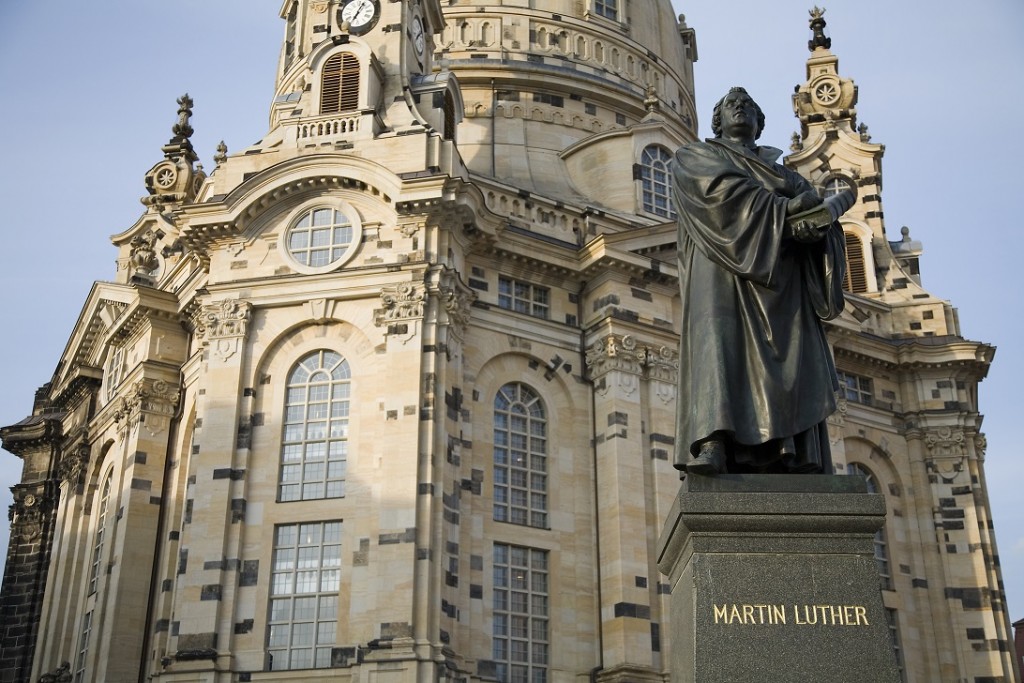 Statue of Martin Luther, in front of the Marienkirche. Dresden, Germany

By Richard Bennett and Stuart

The Lord Jesus Christ Jesus condemned the Pharisees because they were attempting to corrupt the very basis of truth by equating their traditions with the Bible.  He denounced them saying;

“But woe unto you, scribes and Pharisees!  For ye shut up the kingdom of heaven against men; for ye neither go in yourselves, neither suffer ye them that are entering to go in.”

Today, the senior leadership of the Roman Catholic Church also undermines truth by equating their man-made traditions with God’s Word.   Pope Francis and the Roman hierarchy exalt themselves above Holy Scripture.  As a result, the Catholic person ends up believing not in the Almighty God and the Bible, but rather the Catholic Church and her tradition.

Ever since the Reformation began 500 years ago, the Roman Church continues to use its influence to camouflage the truth of the Gospel of Jesus Christ.

What Is Rome’s Latest Scheme to Camouflage the Truth of the Reformation?

By convincing misinformed people that the Reformation was a mistake, Rome seeks to promote a more sinister objective.  Indeed, Rome’s intent is to suppress the truth rediscovered by the Reformation – the glory of the Gospel of Jesus Christ.

Up until recently, Rome has raged against the need for the Reformation.  As shown in the Council of Trent and Vatican Council I, the Roman Catholic Church in the past has taken the tact of debating and condemning those who championed the tenets of the Reformation.

However, the Papacy has refined a new tactic begun around Vatican II.  Under the guise of false unity, Rome has sought to exploit the many professing Evangelicals ignorant of the truth of the Gospel of the Reformation.  The Vatican has begun to promote this deception aggressively during the 500th anniversary of the Reformation.  Thus The Catholic Herald quotes Pope Francis in his January 2017 meeting with a delegation of the Evangelical Lutheran Church of Rome:

“After 50 years of official ecumenical dialogue between Catholics and Lutherans, we have succeeded in clearly articulating points of view which today we agree on. For this we are grateful…’  ‘At the same time we keep alive in our hearts sincere contrition for our faults,’ the Pope said. ‘In this spirit, we recalled in Lund that the intention of Martin Luther 500 years ago was to renew the Church, not divide Her…’ 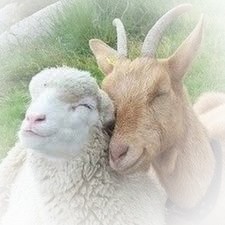 The materials for the week, published by the Pontifical Council for Promoting Christian Unity, say that, after 50 years of dialogue, ‘Catholics are now able to hear Luther’s challenge for the Church of today, recognizing him as a ‘witness to the Gospel.’”

Pope Francis is wrong to claim Martin Luther as a fellow “witness of the Gospel”.  Francis and Luther hold to entirely different gospels!  The same conflict of 500 years ago exists today!

In 2017, Rome has planned several events to convince the world that Protestants no longer have reason to stay separated from her and that the Reformation is no longer necessary.

The Vatican announced in January a new postage stamp to commemorate Martin Luther.  Different Roman Catholic sources debate the significance of this change in Vatican efforts from defaming to honoring the Reformation.  Undoubtedly, this event has profound implications.

Mauro Olivieri, the head of Rome’s Philatelic and Numismatic Office, views the stamp issuance not only as significant but under the direct orders of the Papacy:

“We have to try to understand the present time and be interpreters of the messages that the Holy Father wishes to convey; with the help and understanding of my Superiors of the Governorate, we develop the idea of a modern philately, which mark the important moments of history: no doubt the issue dedicated to the 500th anniversary of the Protestant Reformation marks the rapprochement and overcoming of mutual misunderstandings between Christians, and the philately there is.”

This perceived “rapprochement”, or reconciliation, and “overcoming of mutual misunderstandings between Christians” are mere propaganda for the Vatican agenda.

The Gospel of the Reformation: The Authority and Truth of the Bible Alone

The Reformers in the sixteenth century rediscovered God’s written Word as the absolute authority for faith and practice. The Scriptures do not substitute for God, but rather express the very mind of God.  Christ taught that mankind ought never to invent subjective interpretations of what God Himself has purportedly said.  “Think not that I am come to destroy the law, or the prophets:  I am not come to destroy but to fulfill.  For verily I say unto you, Till heaven and earth pass, one jot or one tittle shall in no wise pass from the law, till all be fulfilled.”

To elevate manmade ideology higher than the Bible is tantamount to calling God a liar.   Rome dismisses the greatness of God in promoting tradition as equal to His Word: “Both Scripture and Tradition must be accepted and honored with equal sentiments of devotion and reverence.”

The Gospel of the Reformation: Salvation Worked by God’s Grace Alone

The Reformers showed that the Scripture wonderfully declares that sinners, “dead in trespasses and sins” are “justified freely by His grace through the redemption that is in Christ Jesus.”  They echoed the Word of God itself, “for by grace are ye saved through faith; and that not of yourselves: It is the gift of God: Not of works, lest any man should boast.”

In opposition to this truth, Rome alleges grace to be a mere aid transmitted through its sacraments.  “The Church affirms that for believers the sacraments of the New Covenant are necessary for salvation.  ‘Sacramental grace’ is the grace of the Holy Spirit, given by Christ and proper to each sacrament.”

The Gospel of the Reformation: Salvation Comes Through Faith Alone

The Reformers taught that God grants faith that brings a sinner to salvation.  The object of such faith is the Person of Christ Jesus Himself.  “Believe on the Lord Jesus Christ, and thou shalt be saved, and thy house.”  God grants such faith through the means of hearing the Word of God: “So then faith cometh by hearing, and hearing by the word of God.”  This principle of salvation through faith alone is so clear in Scripture, it’s obvious.

Regardless, the Catholic Church completely distorts the concept of faith.  Indeed, Rome boasts, “It is the Church that believes first, and so bears, nourishes and sustains my faith.” Then she has the audacity to declare that faith comes through the Church because the Church is our Mother.  “Salvation comes from God alone; but because we receive the life of faith through the Church, she is our mother.” The consequence is that a person believes in Mother Church and not in the Lord Jesus Christ.  “‘Believing’ is an ecclesial act.  The Church’s faith precedes, engenders, supports and nourishes our faith.  The Church is the mother of all believers.  ‘No one can have God as Father who does not have the Church as Mother.’”

Rome compels Catholics to submit to her rule of faith with unquestioning loyalty.

The Gospel of the Reformation: Salvation Originates in Christ Alone

The Reformers recognized Christ alone saves believers.   “Blessed be the God and Father of our Lord Jesus Christ, who hath blessed us with all spiritual blessings in heavenly places in Christ…to the praise of the glory of his grace, wherein he hath made us accepted in the beloved.”

The Catholic Church ascribes salvation to derive from the heart of the individual.  “Justification is conferred in Baptism, the sacrament of faith.  It conforms us to the righteousness of God, who makes us inwardly just by the power of his mercy.” Thus we see that Papal Rome’s teaching that a person is “inwardly just” opposes the clear teaching of Scripture.

The Gospel of the Reformation: Glory Belongs to God Alone 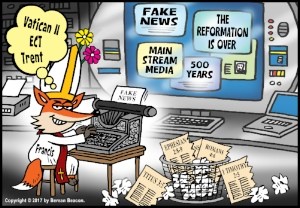 The Reformers understood the principle of giving glory to God alone follows logically from the other principles.  Because justification is by grace alone through God’s gift of faith alone and in Christ alone on the written authority of his Word, to God alone be the glory!  He does not share His glory with Mary, the Pope, nor dead saints.

In fact, the Catholic Church addresses Mary as if she were God.  “By asking Mary to pray for us, we acknowledge ourselves to be poor sinners and we address ourselves to the ‘Mother of Mercy,’ the All Holy One.” The Pope competes with God’s glory in assuming the titles of “Holy Father” and “Vicar of Christ.”

The Roman Catholic Church dilutes God’s glory with its veneration of saints: “Communion with the dead.  In full consciousness of this communion of the whole Mystical Body of Jesus Christ, the Church in its pilgrim members, from the earliest days of the Christian religion, has honored with great respect the memory of the dead…  Our prayer for them is capable not only of helping them, but also of making their intercession for us effective.”

Will we heed the Lord’s call to take hold of the Gospel rediscovered during the Reformation?  This very Gospel has been used of the Lord in revivals throughout church history.  Of old, men and women waited upon God and cried and cried until He came down in power.  We pray to the Lord, as they did, “Oh that thou wouldest rend the heavens, that thou wouldest come down, that the mountains might flow down at thy presence.”

How do we make sure that grace reigns with sovereign freedom, power, and bounty in our lives?  We do this as we take hold of His Word as the Lord’s promise that He made of His goodness to us.  “Blessed be his glorious name for ever:  and let the whole earth be filled with his glory; Amen, and Amen.”