(WNS)–Have you ever seen the face of a woman who spends her days waiting to die? You’ll see close-ups of many such faces in Veil of Tears, a new documentary, narrated by Natalie Grant, that uncovers what one Indian woman calls “the darkest side of our country”: the bitter, lifelong oppression of women in India, all for the crime of being born female.

Veil of Tears, directed and produced by award-winning filmmaker brothers Kenny and Kyle Saylors (Kimjongilia), is meant to make you squirm and gasp until you feel charged with the desire to do something. At times, it feels like a promotional piece for its sponsor, Gospel for Asia (GFA), a mission organization that supports indigenous missionaries from West Africa to East Asia. But the 90-minute film successfully depicts—with powerful human stories, shocking statistics, and gripping imageries—why mission work in India is so important.

Here are some of the atrocities still happening in a country with one of the world’s largest and fastest growing economies: Husbands pass wives from neighbor to neighbor for prostitution that pays for the husbands’ gambling and drink. Suicide rates among women in India are 21 times 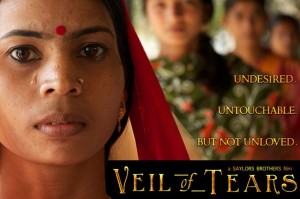 the average rate worldwide. In 2010, there were 8,391 confirmed dowry-related deaths. Every hour, a husband burns his bride alive. About 46 million widows languish in mud-caked slums, banished by in-laws because a wife bears the blame for her husband’s early death. Gender-selected abortion and infanticide are common; India has 37 million more men than women.

Despite the heavy subject, the film bursts with the rich colors of saris, the cheers of waving children, and realistic snippets of daily life: flies crawling over toes and noses, women washing clothes on a communal river while naked kids wade and splash, and even a shot of two men tussling and pulling hair on the back of a pickup truck. In between such shots, GFA missionaries and founder K.P. Yohannan explain why there’s a persisting disconnect between Indian government efforts to eradicate inequality and the thousands-year-old caste system and gender discrimination—and how the gospel of Christ can bring transforming change.

If you would like to arrange a free showing of “Veil of Tears” at your church, fellowship, or small group please visit veiloftearsmovie.com.