After months of consumer and activist comments, picketing at the Attorney General’s Office, and winning a lawsuit against Monsanto who tried to overturn the original law, Vermont has just become the first state to have mandatory GMO labeling. 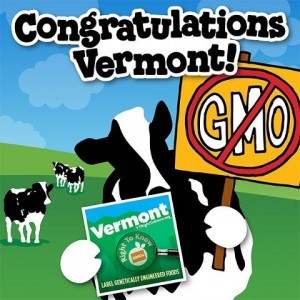 Vermont became the first state to become GMO-labeled (a step toward becoming GMO-Free) in 2014, but Monsanto, Dow, Bayer and other biotech interests decided that consumers had no rights at the state level to determine what they wanted to eat. Vermont was brave enough to uphold the voted-upon law anyhow, and even put money aside for the legal fight they knew would ensue when the new legislation passed.

Recently, the Legislative Committee on Administrative Rules formally filed with the Secretary of State’s Office to uphold the new GMO labeling rule, which will become effective July 1, 2016.

Attorney General Bill Sorrell said that the formal adoption of the GMO labeling law gives ample time to food manufacturers to change their products or lose an entire state’s business.

I’m proud of Vermont for standing strong against biotech, and we need to do the same now as members of Congress will vote this week on the Trans Pacific Partnership (TPP). If this ‘Nafta-on-steroids” bill wins the vote, then it would take away state’s rights to ban or label GMOs, and all the effort Vermont has put into cleaning up its food supply will have been for naught.

Make sure you call or email Congress today and tell them not to allow the TPP.