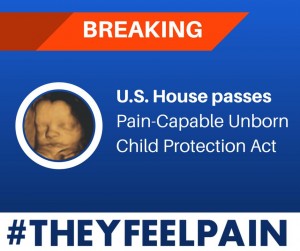 Recently the U.S. House of Representatives, by a margin of 242-184, passed landmark legislation extending federal protections to unborn children who have reached 20 weeks fetal age, and those who are born alive during late abortions. The Pain Capable Unborn Child Protection Act was based on model legislation developed by our colleagues at the National Right to Life Committee in 2010, enacted thus far in 11 states. We thank Rhode Island Rep. James Langevin, who joined 3 other Democrats and 238 Republicans in supporting the bill, which will now move to the Senate. We THANK YOU for making your pro-life voice heard in support of this bill.

Lastly, we would like to share an as-of-yet unconfirmed though very credible report that Planned Parenthood may presently be looking to move their abortion mill from their Point Street location in Providence. We have no further information as of yet, but will continue to monitor the situation.