CAIRO, EGYPT (ANS) – An extraordinary series of videos of Christians forgiving Islamic State have gone viral in the Arab world.

SAT-7 Egypt Director sees the impact of the “Resistance through forgiveness” videos of a 10-year-old Iraqi displaced by Islamic State (IS/ISIS) and of a brother of two Egyptian laborers beheaded in Libya both voicing forgiveness for their persecutors have been watched by a million viewers and have drawn the attention of mainstream Arab media which rarely covers Christian news.

According to SAT-7, under the title Iraqi Girl Myriam Faces ISIS with Love, pan-Arab broadcaster Al Arabiya told how the clip of young refugee Myriam had spread via social media and was impressing ordinary viewers and media commentators. 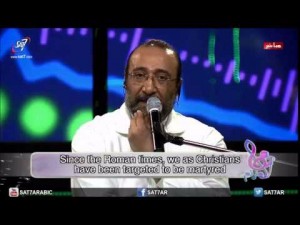 A columnist in the Lebanese newspaper Al Nahar said the SAT-7 interview with her “should be presented in Lebanese schools as a lesson in humanity.”

Farid Samir, Egypt director of Christian satellite channel SAT-7, which made both clips, said: “The massive interest in them shows the impact of “resisting violence through forgiveness.”

In her clip, Myriam says she “will ask God to forgive IS” and singing a worship song. It reached more than one million people and was watched by another 200,000 within 42 hours of appearing on the SAT-7 ARABIC Facebook page. Since then it’s been seen by more than one million viewers on SAT-7 web and social media pages alone.

The clip in which Egyptian Christian Beshir Kamel called a SAT-7 worship program and asked God to “open the eyes” of his brothers’ killers was watched by at least half a million people and shared on news sites around the world.

Farid Samir said, “These clips provide a counter-shock to the horrifying videos of killings that people receive on mainstream media and to their effect on viewers. Myriam’s and Beshir’s calls are a form of resistance through forgiveness. Forgiveness is the core of the Christian message and the core of the message of SAT-7 at a time when mainstream media avoids reporting on Christians.”

SAT-7 Founder and CEO Terrence Ascott added “In a climate in which world media has highlighted IS’ use of social media to recruit people set on violence and to document acts intended to spread terror, the SAT-7 clips spread a radically different message.”