(WNS)–Escalating clashes between Muslim and Christian militias in Central African Republic threaten to plunge the country back into civil war.

More than 100 civilians died in the violence in the past week, and thousands were displaced. The United Nations and other aid groups working in the country have expressed concern that the conflict is becoming increasingly violent and spreading into previously unaffected regions. 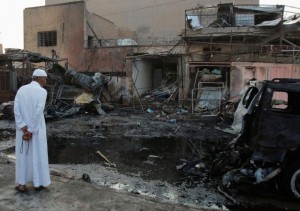 The predominantly Christian rebel group known as anti-Balaka over the weekend attacked the southeastern town of Bangassou, where it targeted a United Nations base and the mainly Muslim neighborhood of Tokoyo. The local Red Cross branch today told Al-Jazeera its officials found 115 bodies in the town, many of them with knife injuries and bullet wounds. The UN refugee agency said the unrest displaced some 2,750 people. On Monday, clashes between rebel groups in the town of Bria also forced about 1,500 residents out of their homes.

Central African Republic broke into a civil war in 2013 when Muslim Seleka fighters overthrew the Christian government and the anti-Balaka rebels stepped up to fight back. Several other militia groups have sprung up across the country’s rural regions, and the resurging conflict is now spreading.

The United Nations said fighting between anti-Balaka rebels and another armed group earlier this month may have killed about 100 civilians and displaced some 3,000 others in the southern town of Alindao. UN High Commissioner for Human Rights Zeid al-Hussein said 121 civilians have died since March, excluding those killed in the latest attacks.

“The violence is spreading to areas of the Central African Republic that had previously been spared the kinds of terrifying violence seen in some other parts of the country,” al-Hussein said. “This is highly worrying and should set off loud alarm bells.”

Doctors without Borders on Tuesday said it had treated 70 people in Bangassou since Saturday. Rene Coglo, the group’s deputy head of mission in the country, said they assisted people who took refuge in a hospital and a church, but many other civilians were trapped in a mosque amid ongoing fighting. Coglo said the refugees had limited access to food or healthcare, and aid workers were unable to bury the dead.

“Bangassou is unrecognizable: Armed men are everywhere, helicopters are flying over our head,” Coglo said. “We fear the worst if effective long-term measures are not put into place to ensure the protection of civilians.”

Yonas Dembele, with the World Watch Research Unit at Open Doors International, told World Watch Monitor the killings were reminiscent of the country’s civil war that sprang from religious and ethnic conflict: “Unless the peacekeeping force in the country acts decisively to bring to an end to these clashes, there is a risk that they will spread and the country might then descend into the instability and conflict of a renewed civil war.”