“Jerusalem Intifada” was how some in the Israeli media portrayed the violence that engulfed much of the Israeli capital over the two-day Rosh Hashanah holiday at the start of this week.

Across large portions of the city, Arab stone-throwers pelted Jewish motorists, leading to the death of Alexander Levlovitz, 64, who lost control of his vehicle in the Armon Hanatziv neighborhood after a rock slammed through his windshield.

Most of the violence was concentrated on the Temple Mount, where Muslim rioters repeatedly hurled firecrackers, stones and firebombs at the one entrance through which non-Muslims can access the holy site.

During the High Holy Days beginning with Rosh Hashanah, many Jews like to visit the Temple Mount, as this was a biblical time of pilgrimage to the ancient place of worship.

But Muslim authorities insist the Jews are trying to “Judaize” the Temple Mount, and deny any connection between the Jewish people and Jerusalem. Such attacks, therefore, are sadly routine.

“The Israeli establishment under the leadership of a right-wing government believes that this is the time for building the Temple and opening a religious war in which Israel cannot win,” declared Sheikh Kamal Hatib, deputy head of the Islamic Movement in Israel, in an interview with Lebanese television station Al Mayadeen.

Notably, there was very little response from the international community until the Israeli police started responding to the life-threatening violence by using tear gas and shutting the Muslims inside their mosques.

King Abdullah of Jordan, which officially oversees religious matters at the Temple Mount, said the “provocation” of Israel trying to maintain law and order would not be tolerated.

“Any more provocations in Jerusalem will affect the relationship between Jordan and Israel, and Jordan will have no choice but to take action, unfortunately,” Abdullah cautioned. 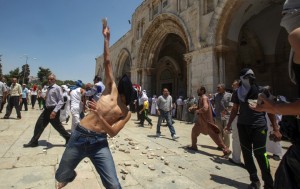 Palestinians throw stones on Israeli police (not seen) at Al-Aqsa compound in the old city of Jerusalem, at the end of the first Friday prayer in the Muslim holy month of Ramadan, 04 July 2104. Israeli authorities limited the age of Muslims from West Bank allowed to enter Al-Aqsa Mosque by the age of 50 for men and 40 for women, a very low numbers of Palestinians mange to attend the prayer. EPA/MAHFOUZ ABU TURK

UN Middle East envoy Nikolay Mladenov was worried that the ruckus atop the Temple Mount would increased hostility and violence in other parts of the region, and US State Department Spokesman John Kirby said the Obama Administration was “deeply concerned by the recent violence and escalating tensions surrounding the Haram Al-Sharif/Temple Mount.”

In typical fashion, Kirby subtly suggested Israel and visiting Jews were at least as much to blame for the situation as the rioting Muslims.

“It is absolutely critical that all sides exercise restraint, refrain from provocative actions and rhetoric, and preserve unchanged the historic status quo on the Haram Al-Sharif/Temple Mount in word and in practice,” he told reporters.

Asked how he would deal with the fact that many of the offenders are minors, Netanyahu promised to “massively increase fines again minors and their families to deter them.”