Syrians are living the horror brought to them by the criminal West. They cannot afford the complacency of shrugging their shoulders in indecision, not when their lives and their ancient civilization is being threatened by Western-paid terrorist mercenaries of the worst kind. 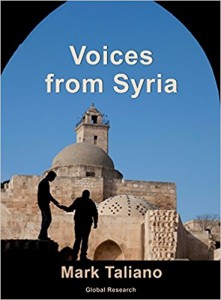 “Our” proxies, slit throats, chop heads, and take no prisoners as we waffle in indecision, ignore empirical evidence, and take the comfortable easy road of believing the labyrinth of lies promulgated by Western media messaging.

As countries are destroyed, and its peoples are slaughtered — think Syria, Libya, Ukraine, and others — by abhorrent Western proxies — public institutions are contaminated, and ultimately replaced by parasitical “privatized” facsimiles. Public banking is looted and destroyed in favour of transnational banksterism, World Bank funding, and IMF usury. Food security is destroyed and replaced by biotech tentacles and engineered dependencies on cash crops and unhealthy food. Currencies are destroyed, sanctions are imposed, and the unknown, unseen hand of totalitarian control imposes itself, amidst the cloud of diversions and confusions, aided by comprador regimes, oligarch interests, and shrugging domestic populations.

Syria refuses to submit. That is why the West is taught to hate her, and the rest of the world learns to love and respect her. (Mark Taliano)

Voices from Syria is a powerful account of a message from the Syrian people telling the West to stop killing innocent civilians in pursuit of their fake “war on terrorism” – Prof James Petras, Bartle Emeritus Professor, University of Binghampton, New York

Canadian Mark Taliano has brought together an excellent mix of anecdotes and analysis to create a very accessible short book on the terrible Syrian conflict. It should serve as a primer for all those who feel curious, dissatisfied or cheated by the near monolithic war chorus of the western corporate media. – Tim Anderson, Distinguished Author and Senior Lecturer of Political Economy, University of Sydney, Australia

Mark Taliano’s book provides a convincing testimony to the bravery and resilience of the Syrian people, who have been fighting against an alliance of Western aggressors and Islamic terrorists for over six years. The fact that one of the oldest cultural nations of the world is bombed back to the Middle Ages by the West and its Arab allies is not only a colossal war crime but also a crime against humanity. The book corrects a large part of Western propaganda claims on Syria. Very readable and revealing. – Dr. Ludwig Watzal, Journalist & Editor, Bonn, Germany

Mark Taliano is not arguing over details and he is right. After reading his beautiful and invigorating book, you will never forget those “Voices from Syria” that the West has refused so obstinately to listen to.

The writer’s honesty, his frankness, his refusal of any intellectual game at the expenses of the suffering Syrian People are such that his pleading can’t be contested. Through the authenticity of his “Voices from Syria” and the accuracy of these genuine testimonies, he shuts the door on the miserable and shameless lies and false flags of Western and Islamist [Wahhabi] propaganda. – Michel Raimbaud is a former French ambassador particularly in the Arab world, in Africa and Latin America

Voices from Syria is a small book with a big message. It would be perfect to use in a group of concerned activists meeting to discuss and disseminate the truth about US or NATO foreign policy in Syria. . It could be used in a classroom or in a library reading club. – Heather Cottin, Sociology Professor, LaGuardia Community College