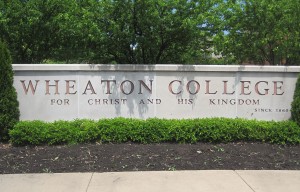 (OneNewsNow.com) Some of the 50 evangelical leaders invited to a meeting near Chicago this week reportedly headed for the exits when it became clear that “Trump-bashing” was on the agenda.

Attendees of this week’s invitation-only meeting of evangelicals at Wheaton College were assured that it wouldn’t be about President Trump, but how to recover the evangelical distinctives and present a united front to a watching world. But Jenna Browder of CBN told Fox & Friends it quickly morphed into something else entirely.

“This was supposed to be a meeting … about evangelism and about faith,” Browder said, “but from what we understand it really turned quickly into a Trump-bashing.”

Browder’s colleague David Brody, also on Fox & Friends, described the gathering as “one-sided venting” and said some of the invitees were blindsided. “This was a two-day conference. The first [day] became basically this anti-Donald Trump free-for-all and got so many folks ticked off [that some] people walked out,” he stated.

Fox & Friends co-host Ainsley Earhardt pointed out that 78 percent of evangelicals still strongly support President Trump. That prompted Brody to suggest that the make-up of the meeting invitees made it difficult to present a unified evangelical voice.

“This was a meeting with a bunch of evangelicals who really have no say within the Trump administration,” he noted, “and the fact that you had no Trump advisory group members there, I think that speaks volumes.” Franklin Graham, Reverend Robert Jeffress and Jerry Falwell, Jr were among those conspicuously uninvited.
The CBN correspondent argued that evangelicals support Trump because he has followed through on his campaign promises to them, including moving the U.S. embassy from Tel Aviv to Jerusalem – something previous administrations had promised but never did.

“That’s what evangelicals love about him: he actually does what he says,” Brody added.