I believe deep in my soul that those ambitions and efforts born of a heart given to Christ are unique and necessary in the context of big picture humanity. Consequently, a life of service to the betterment of human kind would not be a wasted life. I’ve seen this time and again, on so many levels, in so many capacities, and in the eyes of those who’ve answered the call to be His messenger of hope. I often wonder how many prayers have been answered either directly or indirectly, by the actions of people whom I’ve interviewed, and all because He called their hearts and souls to action.

It is truly a faithful spirit who listens to God when he shows them adversity and then lays a plan upon their heart. Often the road forward is not easy, and in fact it’s likely to be more difficult than that person ever could have imagined. Nevertheless, these speed bumps if you will, are of no consequence to the Christian called to service, for his/her heart is filled with the power of the Holy Spirit, as well as the love and confidence of a God who knows more of their worth and capabilities than they do.

I can do all things through Christ which strengtheneth me. Philippians 4:13

While I’ve written about many of these faith-driven “doers”, it’s never too soon to again highlight the contributions of someone whose life and work inspire us to embrace our own calling, and to be not only a messenger for, but a doer of God’s work. Regrettably, this particular honor will be given posthumously to a man of faith who saw what God put up in front of his eyes, and didn’t blink… 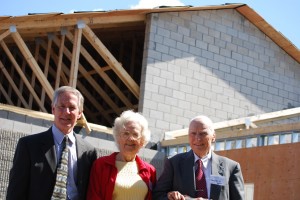 Dr. Richard Clarkson, Headmaster, with Evelyn & Doug Brush during a building expansion project which added a new wing to the school in 2009, allowing the school to welcome more students and open a Preschool and Pre-K program.

The death and destruction of World War II certainly left our nation and its people stunned and tested in ways we hope never again to be witnesses to. Douglas C. Brush was one of many brave young men who went in harm’s way to defend not only a country, but its principles. He would earn the Purple Heart and Silver Star standing in the face of unimaginable evil, and would return home a qualified guardian of those aforementioned principles. Not long after, a humble and quiet hero, Doug Brush would wear another uniform, as a police officer in the City of Warwick, Rhode Island. The next 26 years would be filled with the myriad of trials police officers face daily. From the brutal trauma of a bad motor vehicle accident, to every call for service that causes an officer to catch their breath in anticipation of what they you are expected to do daily, nothing would affect the young Officer Brush more than the pain of families in crisis, or “domestics” as they’re known on the job. More specifically, Doug’s heart broke for the children of these families in turmoil. I suppose not even the physical and emotional fatigue of mortal combat prepares you for the blank stare of a frightened and confused child whose life is compromised in ways they simply cannot grasp.

Doug would marry his best friend Evelyn J. MacAuley and together they had four children along life’s journey. The Lord was at work tugging at Doug’s heart during this time to be sure, as he was compelled to help any and all children he could, regularly and by way of his interaction with them as a policeman. Doug and Evelyn would eventually become licensed foster parents as well, taking in more than 100 disadvantaged children during their lifetimes. Two would join their two biological children, and there would be 15 grandchildren and 13 great-grandchildren to carry the many memories and immense legacy of a spirit I will attempt to explain in this short writing. I’ve said many times, that if we embrace anything in this world it must be the children. For they are the future and we are all entrusted with their well-being by God Himself. I have found however, that understanding this awesome responsibility is far more unique a quality than it should be in today’s world. Nevertheless, folks like Doug and Evelyn Brush understood with great clarity, that if we simply stand by and allow these children to falter, then we are all somehow complicit to the finished product. Simply put, Doug Brush would act. And so he endeavored to do what he could, and more.

After retiring from the police department in 1975, Doug went to work for the Rhode Island Department of Children, Youth and Families (DCYF) for another 12 years, continuing to intervene on behalf of hundreds of children in crisis, and literally changing entire families for the better. In whatever small way he could, Doug was filling voids he knew might eventually have become catalysts for lost hope. Leading, albeit (quietly) by example was nothing new for Doug Brush. From his time in New Guinea, Bismark Archipelago, and the Philippine Islands during the war, to Caprenwray Bible Institute, and then on to graduate magna-cum-laude with a degree in Criminal Justice from Salve Regina University in 1972, Doug would also join with John Farrell, Rev. Henry Bell, and Rev. Linwood Bishop to found the highly acclaimed West Bay Christian Academy in 1981.

I spoke with the schools Headmaster, Dr. Richard Clarkson, and he told me that while he didn’t know specifically how Doug came to the Lord, he did know that he’d spent some time after he retired helping a friend with some “discipline problems” at a Christian school he was running in Pennsylvania, and that Doug eventually spent more than a year learning about youth evangelism. This seems right in line with Doug’s deeply rooted commitment to the children, and could only have inspired him to push ahead. Dr. Clarkson told me he’d never known a more dedicated, yet unassuming and humble man. Doug would serve on the West Bay Board of Directors for 30 years until his passing in the Spring of 2012.

Doug’s life of service took many obvious and notable turns, but it was the not so noticeable actions of a selfless man who graciously and quietly embraced whatever God put on his heart to do, which drew people of all ages to him. At 78, and with the encouragement of his beloved Evelyn, Doug once again put on the uniform and took to signing part-time detail postings in the Warwick Police Department patrol room. He would literally be back on the street (directing traffic), and then donating his entire paycheck to the West Bay Christian Academy without even so much as a mention. Revising his “to protect and serve” role one last time, and among numerous other contributions for which he would accept no acknowledgement, Doug would eventually contribute an additional $20,000.00 in “detail money” to the construction of the growing school. Doug’s service to his fellow man, love of pastoring at his Buttonwoods Bible Chapter church, and dedication to the children he loved, were not just lines on the paper of a life resume, but rather the foundational and spiritual tenets of a life example. 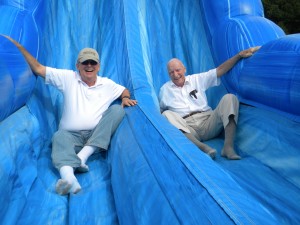 Dr. Don Zeyl (left), a former board member with Doug Brush at WBCA’s 30th Anniversary Event in 2011 – Doug was always a kid at heart, and you can see a bit of that shining through as he takes a ride down the inflatable slide.

An avid Red Sox fan, Doug would always bid “to win” on any tickets used for the West Bay Christian Academy fundraising auctions. Dr. Clarkson told me a story of the very special couple he drove to Fenway because they were getting on in years and Evelyn had suffered a stroke, and how win or lose, Doug insisted on staying at Fenway until the last out was registered on the “Green Monster”. Doug and Evelyn leaned on one another”, Clarkson told me. “It was a love story. And you could tell by the way they interacted with one another.” The school which meant so much to them would eventually dedicate “The Doug and Evelyn Brush Education Wing” with a plaque. Dr. Clarkson and company were so proud to know Doug had a chance to see it  just two weeks before he died. Doug and Evelyn very rarely missed a West Bay event, attending graduations, auctions and scores of other celebrations. West Bay was and is a reflection of Doug Brush’s faith projection. That message of faith, intertwined with education excellence, is furthered there every day. Moreover, Doug’s legacy for the children lives on in the school he helped to build.

I can tell you that it’s easy to get caught up in the politics of any issue. Whether it’s the inner city struggles of fatherless children, or the educational difference between public and private schools, there never seems to be a shortage of bluster and ideological ranting. (Guilty as charged.) With that said, and in Doug’s case, what better way to change the dynamic and chart a new course for success, than to empower the young lives who would take our place in this world? What could be more important than to pluck them back from the brink and take them under our roofs when they are in need, and when we are clearly in a position to help? And what greater legacy could a man leave than to have been a humble servant of Christ, who sought to bring the discipline and power of faith together with the liberating freedom of a proper and Biblically rooted education. I never met Doug Brush, but something tells me he was contemplating these things in some fashion throughout the course of his life.

I’m told Evelyn joined her beloved Doug with the Lord in June of 2013, inseparable in life and only by His will; they are once again a team. In preparation for this story I’ve also been in contact with Whitney Bonham, Director of Marketing and Development for the West Bay Christian Academy, and she tells me they have begun a scholarship fund to honor the memory of Doug and Evelyn Brush. I couldn’t think of a better way to remember this very special couple so dedicated to the cause of the children.

In the end, we may not all be able to walk exactly as Doug and Evelyn did, but we can certainly learn from their lives of service. And we are once again reminded of those who do for no other reason but because it is just and good. Remember folks, our children hold the keys to the world we leave them, and we must work together as parents, teachers, police officers and God’s servants, to ensure they are prepared to live as He desires. If Doug Brush’s life and legacy tell us anything, it’s that, if we grow silent and humble, He will whisper to us as He did to Doug, and we will have “strength for all things”…

There are many ways to honor Doug and Evelyn by donating to the West Bay Christian Academy. You may do so by contacting: