What Are They Trying to Do to Us?

America’s intellectual ruling caste seems to have a big problem with the male half of the human race. You’d almost swear they were trying to get rid of it.

For years academics and noozies have been fascinated by persons who get pieces of their anatomy lopped off so they can say they belong to a sex other than the one into which they were born. The fact that this is not “sex change,” but mere surgical mutilation, is ignored. And any lost soul who resorts to this instantly becomes a celebrated hero… or is it heroine? Well, the XY chromosomes are still there in every cell of his body, so he’s still a male no matter how they shoot him up with female hormones.

Would it please liberals if all the girls became “boys” and all the boys become “girls”? Like maybe an entire generation?  But it’s not all scalpels and hypodermic needles and funny clothes. Then again, maybe it is funny clothes. 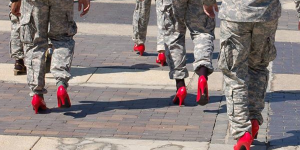 Last week we were treated to the announcement that here, at long last, is what the world’s been waiting for—lingerie for men. Panties. Bras. They haven’t yet come out with a sheer, frilly nightie for Bubba, but who can do everything at once?

We might have ignored it: it comes only a few days after the U.S. Army ordered ROTC cadets at Temple University to march in ladies’ shoes spray-painted red. Any cadet who refused, or played sick that day, could wave bye-bye to his military career.

Following closely in the wake of these earlier news stories, we learned of a Boston University professor who declared “white college males” to be “a problem population.”

Why was the black sociology prof sorry that she said that? Was it because thousands and thousands of Americans suddenly thought BU was a blatantly racist institution dedicated to hating white people, especially white males? That might put a damper on alumni contributions.

In her own words, per USA Today, “I regret that my personal passion about issues surrounding these events led me to speak about them indelicately… I deprived them of the nuance and complexity that such subjects always deserve.” Which is a far cry from saying “I don’t really hate white males.”

Imagine what would happen to a white professor who called blacks “a problem population.” For how many nanoseconds would he keep his job? Who else would get fired with him? How big a riot would ensue? But for the African-American woman who confesses to a passionate hatred of “white males,” the consequences are a brief kerfuffle, a non-apology, and that’s all, folks. She has not been fired.

Somehow masculinity has become offensive to the progressives. I think it always was. Hatred of male-ness is the water-hole for feminism, “gay” rights, transgender nonsense, and the whole “metrosexual” thing which honors supposedly heterosexual males for acting like homosexuals.

So they want to put ladies’ shoes on our military officers, and bras and panties on male civilians, and somehow this is going to lead us to Utopia. Males are the “problem population.” Ask any feminist. Why, if you could just get rid of all the males—or allow the males to live, but turn them into pseudo-women, or at least train them to act like women—you’d have a world without war, poverty, inequality, or Global Warming.

I wish I could reassure you that none of this is anything but more inane progressive fantasy, but I can’t. It was, after all, the Dept. of the Army that ordered the Temple cadets to march in ladies’ shoes. The Dept. of the Army is obviously run by wackos now; but those wackos have tanks and guns.

Let me remind you again that there is no more anti-human force in all the world than secular humanism and its boot-licking slave, liberal politics. Wait’ll you see what they come up with after they get rid of all the males.