What Church Would Christ Attend? 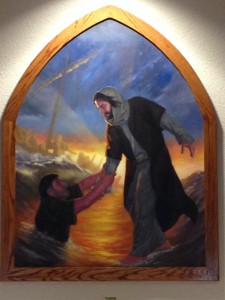 All we know about Christ is what we read in the Scripture. Everything else is speculation. That includes the silly “pictures” of Christ that appear in the clouds, in grains of wood, and in pancakes! Added to those would be the statues and paintings done by medieval artists that people with more money than sense pay millions of dollars for. The feminine “photos” that hang on the walls of many homes and the huge pictures found in many churches are unsupported, unrealistic, and untrue images of Him. Again, all we know about Christ is in the Bible.

As to the feminine pictures, they are obviously extremely unlike the real Christ. He grew up in a carpenter’s home, so we know He must have felled trees and dragged them to his stepfather’s shop. He sawed logs and planed lumber. He was muscular and manly as well as magnificent. And of course, no rational person believes the tales of those who “died” and talked to Christ and returned to earth to boast about it. Any contact with the living Savior would render anyone prostrate at His feet in shame or in awe, humility, silence, and reverence.

If He were looking for a church to attend, it would be one that closely resembled the church He established that we discern in the book of Acts. It would be a church that cared for people, taught the Scriptures, lived godly but flawed lives, and sought to carry out His last command about going into all the world and preaching the Gospel, baptizing, and making disciples.

So, we eliminate most churches rather quickly. If a church does not teach the Bible, does not baptize new converts who professed faith in Him, and is not interested in spreading His message, those churches would not be considered as possibilities.

Does anyone think Christ would feel at home in a massive church that has millions of dollars’ worth of art, statuary, furniture, jewelry, etc.? I’m afraid He would be stunned and shocked at the mumbo jumbo, the repetition, the strange doctrines, the blasphemous liturgy, and the endless and meaningless routine. He would see priests, prelates, and popes garbed in finery and living in unrestricted opulence enough to make an oriental potentate blush at the ostentation. He would react the same way to many television evangelists who are as worldly, wicked, and wealthy as

many liturgical church leaders. Such leaders don’t require one to kiss their ring; only open their wallet.

If Christ visited some mainline churches, His name would seldom be mentioned and even then without New Testament connotation.

He would hear well-educated clergy deliver very dull, dishonest, dissonant discourses that would never reach the heart, prick the conscience, or teach the Gospel. Being omniscient, He would know that those preachers, shortly after seminary, took ordination vows to be true to the Scripture while knowing they did not believe the Scripture. Liberal, unbelieving preachers and theologians are hypocritical apostates. If they had any character they would resign and find a real job where they could be honest. He might even visit some of the cults where unbelievable, uncommon, and unscriptural doctrines are taught, doctrines that did not come from the Bible but from the confused, angry, hateful, mind of psychopaths.

When entering a loosey-goosey, touchy-feely “no brand” church (a “church” but one trying to hide what it is supposed to be) His appearance would embarrass many of the congregants. These modern “Christians” think their feelings and their experiences are more vital than truth. Their ministers major in patting the back and tickling the ear, but never getting under the skin. No one is ever confronted or convicted and only occasionally challenged. I am thinking not only of the ministry of reproof and rebuke but also of the message of inspiration, of encouragement, of

comfort. People leave church at noon with their souls unstirred, their hearts untouched, their consciences unpricked. They leave church licking a stone rather than chewing bread. Therefore, most are also unconverted. No, He would not quickly find a church that He established.

He would eventually visit a church that is known for being true to the Bible, known for its simplicity, known for concern and love for others, known for its excitement, known for its beautiful, scripturally-based music, known for sermons that explain the Scripture without twisting passages to conform to a trendy society.

That church may be a storefront in an inner city; a simple, clean, functional church in an affluent suburb; or a church that meets in a home with only a few families. And on rare occasions it might be a megachurch.

Would Christ be welcome in your church? Would He find it true to the church He established? Or, would He say “I have somewhat against thee….repent, and do the first works…so then because thou art lukewarm, and neither cold nor hot, I will spue thee out of my mouth.” Christ told the local church at Laodicea, “You make me sick.”

I’m afraid He would say the same thing to most churches in our day.

(Dr. Don Boys is a former member of the Indiana House of Representatives, author of 15 books,

frequent guest on television and radio talk shows, and wrote columns for USA Today for 8 years.

Time Has Come–Again!; and The God Haters are all available at Amazon.com. .Learn more at www.thegodhaters.com.