What Is A Good Name? 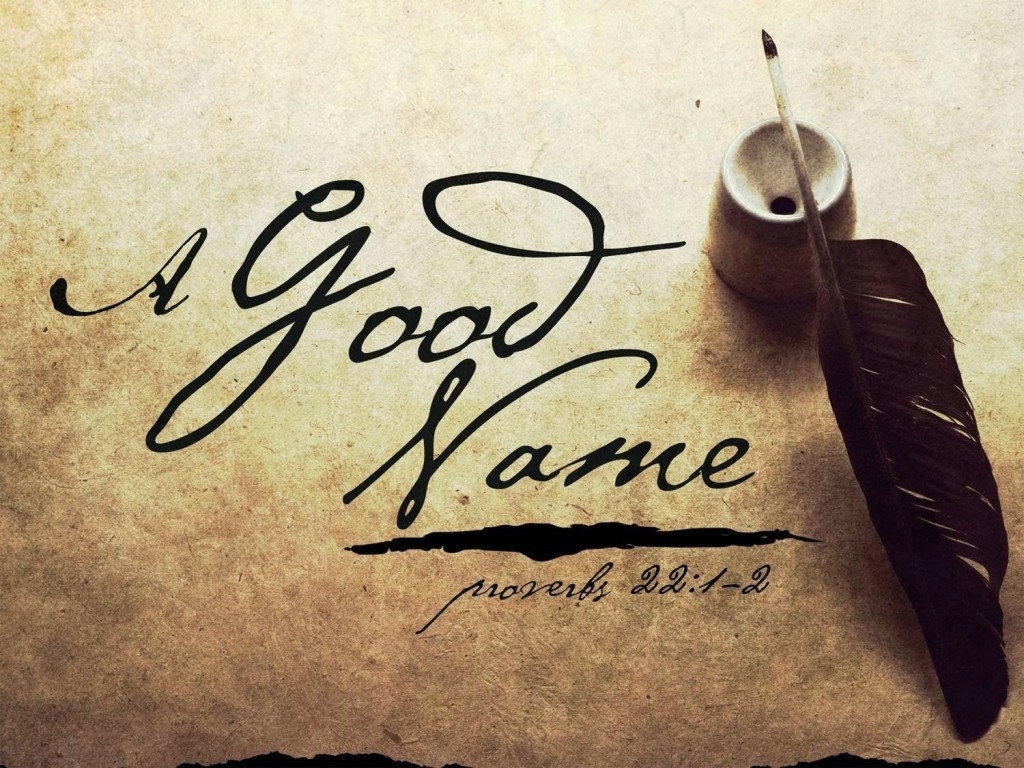 A good name is to be more desired than great wealth, Favor is better than silver and gold. The rich and the poor have a common bond, The LORD is the maker of them all. Proverbs 22:1-2
What is a good name? That’s a big question, isn’t it? What is good, after all, and who gets to define it? That’s the name of a series I taught from my pulpit not so long ago. What we learned was that God is good. Man, on his own, is not and must be stripped of the latter notion and given wisdom to know the prior. Such is sanctification in Christ’s good name.

May we propose that a good name is a name which others deem acceptable? Is this a good enough definition? What about if the people defining good are evil? “Woe to those who call evil good, and good evil; who substitute darkness for light and light for darkness; who substitute bitter for sweet and sweet for bitter” (Isaiah 5:20)! The Bible clearly states, through a multitude of passages, that unregenerate man is inherently evil, “knowing this, that our old self was crucified with Him, in order that our body of sin might be done away with, so that we would no longer be slaves to sin” (Romans 6:6). We also know from Holy Scripture that evil man assures himself, and others, that evil is actually good.

If you were of the world, the world would love its own; but because you are not of the world, but I chose you out of the world, because of this the world hates you.  John 15:19
We may rightly conclude that since the unregenerate world is evil, and since it loves its own, that it will supplant godliness (God’s version of good) with evil and simply call it “good”. In other words, everything is backwards. This means that a “good name” by world standards is actually not necessarily a good name by God’s. Even if you’re the most likable person on the planet, it means absolutely nothing. Consider Jesus. He was perfect in His incarnation and most people despised Him to the point of murder. So, we might add that likability has nothing to do with having a good name by God’s standards.

A perfect example of a person with the wisdom to know such things is Moses.

A good name stands in stark contrast to those whom the world esteems.

A good name stands in stark contrast to those whom the world esteems. I believe many Christians have lost sight of this and need to be taught the truth of the matter. While the Bible says, “If possible, so far as it depends on you, be at peace with all men” (Romans 12:18), it doesn’t ever equate said “peace” with compatibility, likability, or friendship with the world. In fact, it warns us of something very different.

You adulteresses, do you not know that friendship with the world is hostility toward God? Therefore whoever wishes to be a friend of the world makes himself an enemy of God. James 4:4
The Word doesn’t want us believers to be confused about any of this. We mustn’t allow the world to define “good” for us, for it will always mislead us, keeping us in bondage to sin. If we suffer for having a good name by God’s standards, then so be it. “For it is better, if God should will it so, that you suffer for doing what is right rather than for doing what is wrong” (1 Peter 3:17). Standing up for what we know to be right is foundational to a good name. Let us do that, minimally, and let the chips fall where they may.