When We Struggle to Understand Why

By Carol Round
CLAREMORE, OK (ANS)– “Why, my soul, are you downcast? Why so disturbed within me? Put your hope in God, for I will yet praise him, my Savior and my God” Psalm 43:5.

With the recent unexpected suicide of comedian and actor Robin Williams, many in the world struggle to understand what would lead someone, who seemed to have it all, to take his own life. Even though Robin candidly shared his lifelong struggles with depression and addictions, it’s still difficult to comprehend how a funny and kind man would be so desperate to end it all.

For those who saw a comedic genius on stage and in the movies, it might be harder to grasp the pain he often concealed. I recall reading an article about the famous comic about 10 years ago, which revealed facts about the beloved actor’s childhood. As a child, he was overweight, shy and bullied by others in his class. Comedy became his relief and earned him friends.

Robin’s father, who was a senior executive at Ford Motor Company, was away much of the time and, according to sources, when the elder Williams was home, the young boy found his father “frightening.” His mother also worked, leaving Robin to be cared for by the maids employed by the family. He claimed his upbringing left him with “an acute fear of abandonment and a condition he described as ‘Love Me Syndrome.'” 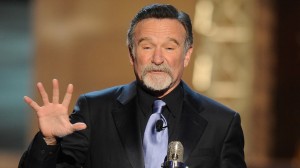 Robin Williams is not the only one of us to battle depression. I’ve been there. There are some-even Christians-who consider the topic taboo. Depression exists. Study the Bible and you will find many people, including King David, who struggled with the affliction. Even the saint, Mother Teresa, fought depression, which can be triggered by the death of a loved one, illness, loss of a job or status, divorce or many other traumatic events.

Commenting on Robin William’s death, Andrew Solomon, author of “The Noonday Demon,” said, “We have to recognize that if you have depression and enormous wealth and success, the love of most of the people in America – you can have all those things and still be subject to the ravages of depression. The tragedy is that he didn’t have any place to turn.”

Solomon’s last statement made me wonder. No place to turn? A man who brought so much joy and laughter to others had no place to turn? The psalmist reminds us, “The Lord is close to the brokenhearted and saves those who are crushed in spirit (Psalm 34:18).

English Baptist pastor and writer, Charles Haddon Spurgeon once said, “I find myself frequently depressed-perhaps more so than any other person here. And I find no better cure for that depression than to trust in the Lord with all my heart, and seek to realize afresh the power of the peace-speaking blood of Jesus, and His infinite love in dying upon the cross to put away all my transgressions.”

If you are thinking about suicide, don’t keep it inside. Tell someone. Never give up the fight. There is always hope.