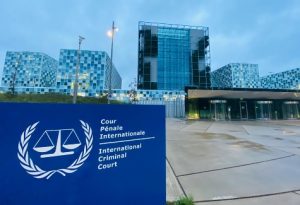 Yeadon is a citizen of the U.K. who has made several whistleblower videos describing the horrific damage that the Covid injections are causing and will continue to cause among men, women and children of all ages who receive them. Unlike other former Big Pharma collaborators, such as Dr. Robert Malone, Dr. Yeadon has not pulled any punches. Whereas Malone and even Dr. Peter McCullough, have said that some elderly populations receive some limited protection from the injections, Yeadon has predicted the shots will result in nothing short of a global Holocaust. In May, 2021, Yeadon issued what he called his “final warning to humanity.” 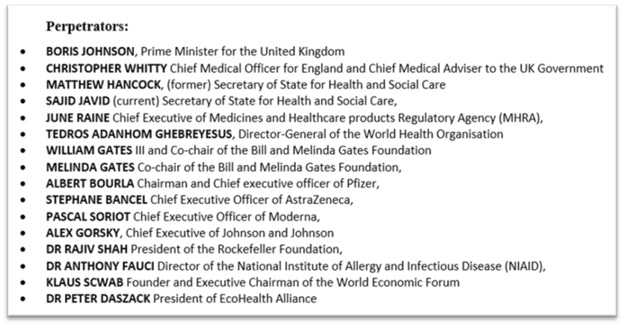 The lawsuit names all of the above defendants as “responsible for numerous violations of the Nuremberg Code … war crimes and crimes of aggression” in the UK, the U.S. and many other countries.

After repeated unsuccessful attempts to raise a case with the British Court system, the applicants filed their complaint with “the utmost urgency” to the International Criminal Court at the Hague, Netherlands. They plead with the court “to stop the rollout of COVID vaccinations, introduction of unlawful vaccination passports and all other types of illegal warfare … being waged against the people of the UK.”

The UK Parliament just passed a new law this week, supported by Boris Johnson, that will require proof of vaccination at all large-venue events. In a vote of 369 –126, the U.K.’s House of Commons approved the use of vaccine passports at places such as nightclubs and other indoor venues of 500 or more people and all venues with more than 10,000 people, in a move opponents have described as creating “2nd class citizens.”

According to LifeSite News, the Dec. 14 vote came as Prime Minister Boris Johnson hyped up fear over the Omicron variant of COVID-19. He announced the “Plan B” winter restrictions, such as increased facemask mandates and vaccine passports.

A total of 369 Members of Parliament (MP’s) voted for the use of vaccine passports, while 126, including 98 of Johnson’s own Conservative MP’s, voted against the measures. Major cities in the U.S., including New York, San Francisco and Los Angeles, are following the lead of cities in Europe and implementing digital health passports.

In the group’s complaint, filed Dec. 6, the applicants present evidence that COVID-19 “vaccines” are in fact experimental gene therapies synthetically engineered with gain-of-function research [scientific lingo for a bioweapon].

They further demonstrate that the experimental “vaccines” have resulted in:

The applicants maintain that “the suppression of safe and effective alternative treatments for Covid-19 amounts to murder and warrants a full investigation by the court.” They noted that besides censorship of online information on and promotion of these alternative treatments, “some academic journals are blocking the publication of studies showing the effectiveness of drugs such as Ivermectin and Hydroxychloroquine.”

The applicants provided quotes from Holocaust survivors who have drawn “stark parallels between Covid restrictions and the beginning of the Holocaust.” In an open letter, the Holocaust survivors have asked medical regulatory authorities to “stop this ungodly medical experiment on humankind immediately,” which they maintain violates the Nuremberg Code.

They also allege that “another holocaust of greater magnitude is taking place before our eyes.” One survivor, Vera Sharav, noted in an interview cited in the complaint: “The stark lesson of the Holocaust is that whenever doctors join forces with government and deviate from their personal, professional, clinical commitment to do no harm to the individual, medicine can then be perverted from a healing, humanitarian profession to a murderous apparatus.”

The group also accused the defendants of hijacking influenza, pneumonia and other respiratory illnesses and classifying them as “Covid-19.” See Figure 1 below. 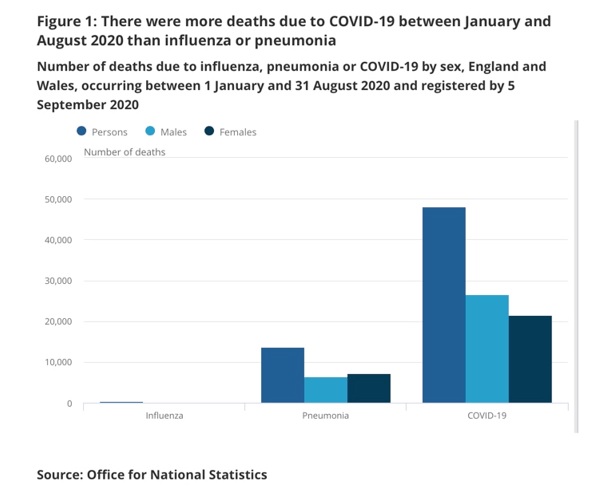 The applicants who filed the case at the ICC are as follows: