Who is the REAL bully in the Ukraine crisis? 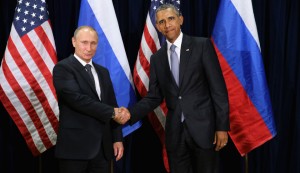 The anti-Trump Neocons at Fox News are at it again. They recently aired interviews with ex-officials of the Obama government who blamed most of the world’s current ills on Russia, calling Putin a bully (standard fare today) because his country defended the Russians in Crimea and extended the offer to hold a referendum and should it succeed, to accede to Mother Russia. The Neocon-backed Kiev thugs were backed up by the biggest bully of all: The Washington DC government.

During the Maidan coup, Assistant Secretary of State Victoria Nuland was on hand in Kiev, handing out cookies to the rioters (knowing that this was an illegal armed confrontation). The story of Nuland’s perfidious role in the Kiev violence is documented here. Nuland admitted on video here that it cost the State Department $5 billion to create the ignominiously failed state of Ukraine, which today has an economy equivalent to that of Haiti.

George Soros also admitted on the Fareed Zakaria program that he had a hand in the Ukraine coup, as I pointed out here. And we all trust George to do the right thing, don’t we?

To get an idea of how this “democratic” experiment has fared so far, you need only read this report:

“In little over a year, living standards in Ukraine have fallen by half, the value of the currency has slumped by more than two-thirds, and inflation has skyrocketed to 43%. Yet, even as the economy has collapsed, the government has insisted on economic policies that can only be termed suicidal.

By tearing up contracts with Russia in 2014, Ukraine’s defence and aviation industries lost 80% of their income.”

Putin’s actions to protect his people certainly does not make him a bully by anyone’s standards except those of the State Department and our increasingly Neocon government. In fact, Putin would be seen as a bully by his constituents if he denied them protection and sided with Washington.

You say why did the Russian speakers need protection? The photos in this article and this video illustrate it best.