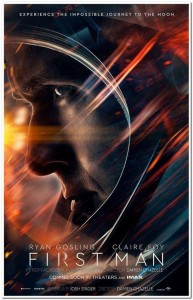 A longtime Christian leader is joining the chorus of boos over a new film that blatantly omits a historic moment in U.S. history. Neil Armstrong stepped into the history books on July 20, 1969, when he became the first human being to step foot on the moon. “That’s one small step for man,” he famously announced, “one giant leap for mankind.”

It was also a promise kept by President John F. Kennedy when the United States, in the midst of the Cold War, was competing against the Soviet Union after it launched the Sputnik satellite in 1957, alarming the West. Three years later, Kennedy told a joint session of Congress that the U.S. was committed to putting a man on the moon by the end of the 1960s.

Yet the flag-planting moment is omitted from “First Man,” a $70 million drama about Armstrong and fellow Apollo 11 astronaut Buzz Aldrin. Why? Because filmmakers wanted to focus on human achievement, not the American effort to reach the moon.

The film, which opens in October, has enjoyed good reviews despite the flag controversy. The film’s director, Damien Chazelle, has told the media there is a scene depicting the flag on the moon’s surface but has also defended omitting the historic moment because he wanted to celebrate human achievement rather than singling out one country.

Echoing the film’s director, Ryan Gosling, the actor who plays Armstrong in the movie, has said he viewed it more as a “human achievement” rather than an American one.

“I take exception to that,” responds Dr. Richard Land, president of the Southern Evangelical Seminary. “Three American astronauts died getting us to the moon, and it was American know-how and American ingenuity that got us to the moon before the Russians.”

The omission has also been criticized by Aldrin himself, now 88, who posted historical photos on his Twitter page and included the hash tag “Proud to be an American.”

Land points out that the U.S.-versus-USSR race to the moon represented competition between two completely different systems of governance and which one would ultimately achieve greatness.

“The Russians used Sputnik to claim that their system was better than our system,” he recalls. “And we know it wasn’t.”