(Newsbusters) – Despite its many panelists, ABC’s The View has always pushed one view, and it certainly has never been conservative or pro-life.

So imagine how the ladies at the liberal talk show reacted when actor Kelsey Grammer posted a photo of himself wearing a pro-life shirt to his Instagram account last week. The ensuing confusion over a Hollywood elite having a different view than their own left the panel dumbfounded recently.

The t-shirt Grammer wore was designed by pro-life advocacy group Abort73, and compared abortion violence to gun violence by asking, “Would it bother us more if we used guns?”

The shirt prompted a discussion on The View where the crew slammed the male actor for getting between a “choice between [a woman] and her God.” 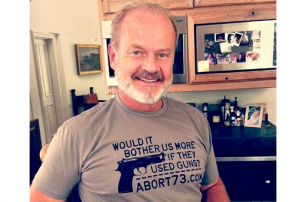 Whoopi Goldberg introduced the segment by highlighting that Grammer was “causing a lot of controversy” by wearing an “anti-abortion shirt.” “Should abortion be equated with gun violence?” she asked. “I’m not sure I understood the quote.”

While the numbers on gun violence and abortion vary depending on the source, Whoopi dismissed Paula’s fatality-count comparison entirely. “To some people,” Whoopi responded. “That’s some people’s opinions.” Whoopi continued to rant in favor of “choice” – accompanied by applause.

“But if you’re a woman who has found that she needs to go get an abortion, isn’t that her choice between her and her God?” she asked. “If you go into a school and you shoot up 5 and 6 and 7-year-olds, children who have lived with you, grown with you, that you have put all your love and attention into, you know, I think there’s a big difference.”

Yes, because lack of “love and attention” make an unborn baby’s death A-OK. Besides that, Grammer is a male, which disqualifies him from speaking out on abortion, according to Whoopi.

“I think most of these folks who make those kind of comparisons,” she pressed, “I need you to be more [sic] women so we can have this conversation because you guys will never have to make this decision. Ever.”

If that wasn’t enough, Michelle took issue next with Grammer’s smile in the picture.“Can you imagine if Frasier had worn this shirt?” she asked about Grammer’s TV character. “Ruins the show, first of all.”

Whoopi concluded by revealing the unsurprising crew’s view on guns and abortion: “You can’t equate the two.”