Why did the DNC refuse to let the FBI look at its servers? 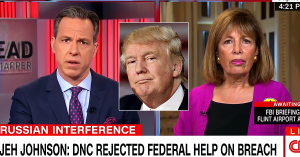 The fact that last year the Democratic National Committee refused to allow the FBI to examine its servers after Democrats claimed Russia hacked into them during the election cycle has always bugged me.

It doesn’t seem like something the DNC would do if it really wanted justice to be done. Could this refusal to let the world’s most respected law enforcement agency examine its servers be part of some kind of cover-up? And what about the scandal surrounding Democrats hiring the Awan brothers? As the Daily Caller reported, “Hina Alvi, her husband Imran Awan, and his brothers Abid and Jamal were highly paid shared IT administrators working for multiple House Democrats until their access to congressional IT systems was terminated Feb. 2 as a result” of an investigation into “a major security breach on the House of Representatives computer network.”

Apparently, I’m not the only one wondering about this. Former Homeland Security Secretary Jeh Johnson brought up the strange DNC action before a congressional committee, prompting Rep. Louie Gohmert to weigh in.

“I know in my days as a prosecutor and as a judge and chief justice, normally when someone had a crime — were the victim of a crime, they wanted law enforcement to come in and help them with few exceptions – especially when we’re talking about, you know, their whole essence through the Internet,” the lawmaker told Lou Dobbs on Fox Business.

Later in the interview Gohmert added: “I think the better question is why would they not invite them in. And I’m really interested in their excuse, but just from my own experience in all those years usually the reason somebody didn’t want to invite law enforcement in to investigate is because they knew they would find that they had committed crimes if they came in and started investigating.”

Exactly. The DNC’s behavior is the kind of behavior one would expect of a guilty person.