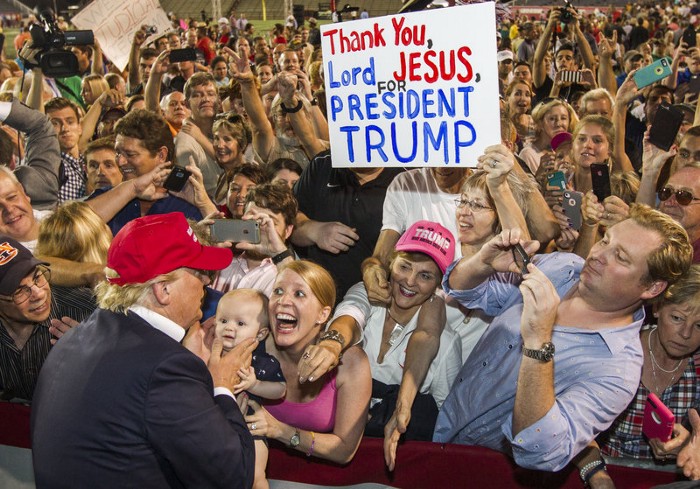 At a recent MAGA rally

I can understand why evangelicals would vote against Hillary Clinton by voting for her opponent, Donald Trump. Who in their right mind wanted Hillary in the White House? But now we are not talking about voting against someone; we are talking about a gargantuan lovefest between evangelicals and Trump. WHY do evangelicals love Trump so much? Most evangelicals will not admit it, but their support for Trump borders on idolatry. They practically worship this man. WHY?

Donald Trump is a man totally devoid of character and honor. He is a man who has never respected any oath he has ever taken or any contract he has ever made. He is a pathological liar. He is a for real sexist. He is a sexual deviant. He is a textbook narcissist. He is a braggart, a bully, a belligerent and a buffoon. He is a career criminal and gangster. He survives by threats, bribery and intimidation. He uses power and money to ruin and destroy anyone who gets in his way—friend or foe. He is an undisciplined hothead. His use of vulgarity, profanity and the Lord’s name in vain rivals or surpasses the filthiest mouth coming out of the filthiest hellhole in the world. Richard Nixon and Harry Truman wouldn’t be able to keep up with Trump’s filthy blasphemous mouth. (The Scripture says God’s enemies take His name in vain, Psalm 139:20. Of course, in order to continue idolizing Trump, evangelicals will continue ignoring that verse too.) Donald Trump is the quintessential spoiled rich brat that never grew up. In other words, Donald Trump’s entire adult life is the personification of everything the Bible abhors. Yet, evangelicals who claim to love the Bible love Donald Trump. WHY?

I’m not a fan of George Will, but he said something on a New York Times Book Review podcast that every evangelical needs to hear. Will said of Trump:

I believe that what this president has done to our culture, to our civic discourse … you cannot unring these bells and you cannot unsay what he has said, and you cannot change that he has now in a very short time made it seem normal for schoolboy taunts and obvious lies to be spun out in a constant stream. I think this will do more lasting damage than Richard Nixon’s surreptitious burglaries did.

The report goes on to say:

Will’s broader argument is that Nixon’s coordinated burglaries at the Democratic National Committee were secret and, once revealed, broadly condemned by the public and the two political parties. What Trump is doing is happening right in front of our faces — and with the tacit assent of the Republican Party that Will left in 2016.

“What Donald Trump’s revolutionary effect has been [is] to make things acceptable that were unthinkable until recently,” Will said on the Times podcast, asking host Pamela Paul if she could even conceive of past presidents like John Kennedy or Dwight Eisenhower uttering any of the many things Trump has said in office.

The words of Will that run truest to me were these: “You cannot unring these bells.” I think he is 100% right on that. The idea that once Trump leaves the White House — whether involuntarily in January 2021 or voluntarily-ish in January 2025 — the impacts and reverberations of what he has done to the presidency (and to the way in which the presidency is covered) will disappear is a fallacy. 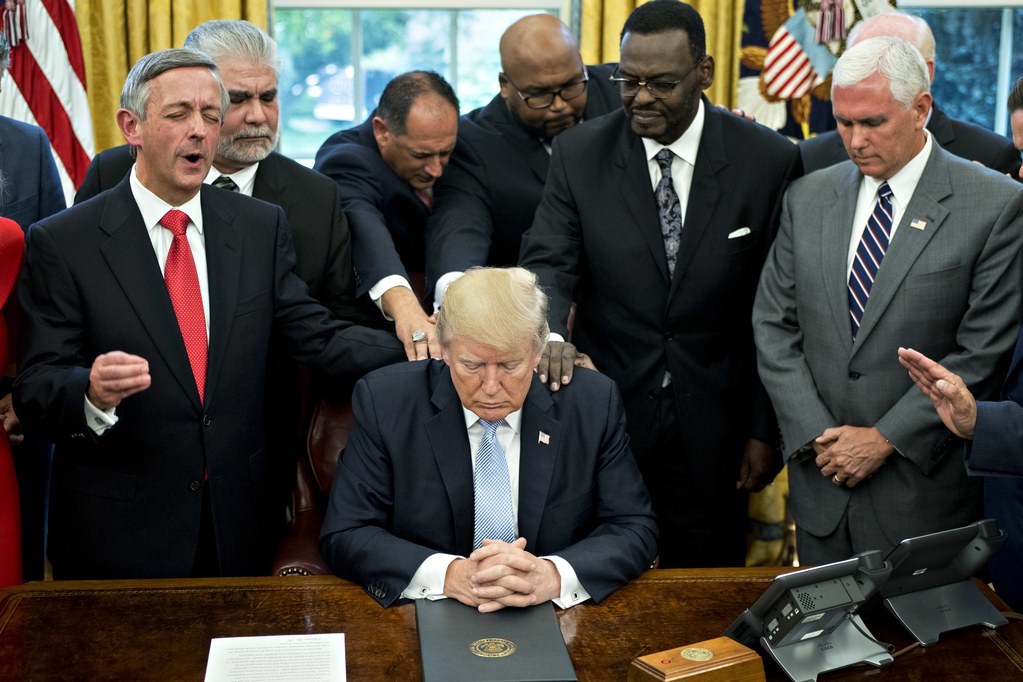 Praying in the Oval Office

Politics is a copycat game. Always has been. What Trump has taught politicians is that telling the truth isn’t all that important — especially if you have your own bullhorn (in Trump’s case Twitter + Fox News) to make your own “alternative facts.” And that presidential norms and the idea of “being presidential” is a meaningless construct. And a lot more “lessons” that will be destructive to the way in which people run for president and act once they get elected.

One Democratic candidate for President that you probably haven’t even heard of is Massachusetts congressman and former U.S. Marine Seth Moulton:

In an interview published on Friday, Democratic presidential candidate Seth Moulton said that Trump voters “know” that the president is an [expletive], The Hill reports.

Moulton suggested that other Democrats running for president appear to believe that they can persuade Trump voters to vote against the president in 2020 by convincing them that he is not a moral person.

“I think a lot of Democrats think, ‘You know, these Trump voters, what we need to do is we just need to educate them, and we’re going to get it through their heads that this guy is a bad guy,’” he opined, proceeding to suggest that Trump supporters understand what the commander-in-chief is like, but simply don’t mind.

You better know they don’t mind. But WHY NOT?

The superficial answer to this question is that evangelicals have been hoodwinked into believing that Trump actually means what he says when he talks about being pro-life, pro-Second Amendment, anti-LGBT agenda, anti-establishment, anti-illegal immigration, anti-globalism, etc. Again, Trump is a pathological liar. He doesn’t mean a word he says; but evangelicals are convinced he tells the truth. And it wouldn’t do any good to spend the rest of this column documenting the facts that prove he doesn’t tell the truth, because I have been documenting these facts for over two years in this column, and evangelicals won’t even examine the evidence. Their minds are made up, and they refuse to be confused with facts. They believe what Trump says, because they WANT to believe what Trump says. It’s as simple as that. 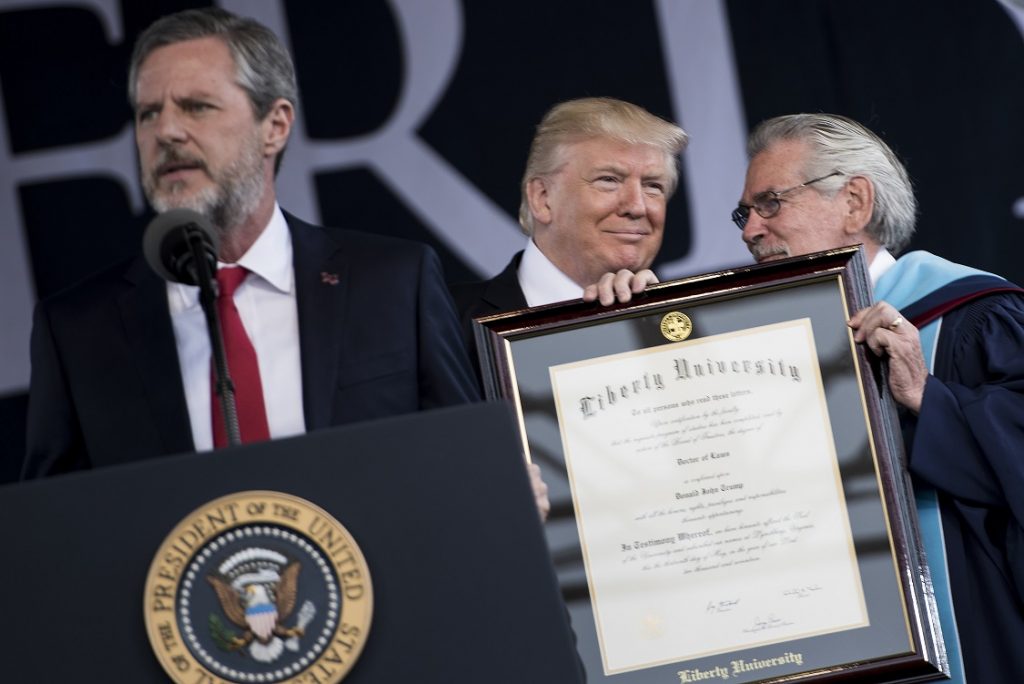 Of course, a large part of this deception is due to the way Jerry Falwell Jr., Pat Robertson, Franklin Graham, Robert Jeffress, et al. have been gushing over Trump like he’s another John the Baptist who’s paving the way for the Messiah. These “Christian leaders” have the ear of millions of evangelicals. If these “great men of God” say it, it must be true.

Thankfully, there are wonderful exceptions to what I am saying. Over my 44 years of Gospel ministry, I have come to know some of the sweetest, kindest, most loving, humble, godly, giving, honest and honorable Christian evangelists, pastors and people in the world: wonderful, precious souls. But without reservation or hesitation I can say that these terrific people are a small percentage of the whole. In word and deed, most evangelicals have a track record of being little more than miniature reflections of Donald Trump. Evangelicals love Donald Trump because in character and conduct he is truly one of them.

If you want to think of evangelicals as hypocrites, that’s fine. But don’t think of them that way because of Donald Trump. He is practically the apotheosis of conservative Christianity in America, not some weird, blustering outlier. No one should be either surprised or shocked that they love him.

However, there are four specific things about Donald Trump that make him achieve this almost god-like status with evangelicals.

No, it’s not his pro-life verbiage. Like Trump, most evangelicals only provide lip service to the pro-life cause. Evangelicals will look you in the eye and tell you that the GOP is a pro-life party. What a joke! Roe v Wade was passed by a GOP-dominated Supreme Court. The GOP has controlled the Supreme Court ever since 1973. The GOP controlled the entire federal government for 4.6 of G.W. Bush’s eight years in office. And they controlled the entire federal government for the first two years of Donald Trump’s presidency. Nothing was done to overturn Roe. Plus, know this: Nearly 50% of the women and girls seeking abortions are regular attenders of evangelical churches.

No, it’s not Trump’s anti-LGBT agenda verbiage. Most evangelicals are fine with the fact that homosexuality permeates their churches. Homosexuality is rampant in many Christian colleges and universities. It’s mostly hushed up; but almost everyone knows it’s there.

No, it’s not Trump’s pro-Second Amendment verbiage. First, Trump has already handed America more gun control than Barack Obama, and second, most evangelicals are as mushy on the Second Amendment as a bowl of hot grits. Tell me, when is the last time you heard the likes of Robert Jeffress and Franklin Graham say one word about the God-ordained right and duty to keep and bear arms?

No, it’s not Trump’s pro-limited government verbiage. Donald Trump has exploded the spending, size and scope of the federal government equal to or surpassing any of his predecessors.

From their idolatrous love affair with the 501c3 tax-exempt, non-profit organization status of their “churches” to their opulent buildings to their success-driven “ministries” to their prosperity “gospel” to their golf club memberships to their all-expense paid luxury vacations, evangelical pastors and congregations love money. Even though he made his fortune via corrupt business practices, immoral bankruptcies, theft, Jewish mafia-backed criminal activity, tax evasion, etc., billionaire Trump is what many evangelicals wish they were.

One thing I have found to be consistent with evangelicals is their intense hatred toward the Muslim people—and the Palestinians as well. The evangelical sermons, seminars, rallies, community meetings, books, DVDs, periodicals, radio broadcasts, television broadcasts, etc., all spewing vitriol against the Muslim people are ubiquitous. Donald Trump gives these Muslim-haters justification for their hatred.

The vast, vast majority of evangelicals are Christian Zionists. They worship all things Israel. Their misinterpretation of Genesis 12:3 (and the rest of Scripture relating to Israel) has turned our evangelical churches into little more than one big Zionist cult. Donald Trump could disappoint them on almost every other issue, but as long as he remains the rabid Zionist he is, evangelicals will continue to love him.

Support for Zionist Israel and support for foreign wars go hand in hand. In fact, take away the former, and it would automatically remove the latter. Evangelicals love war. They love the military. They love killing. They love dropping bombs. They love war.

I am not talking as an outsider. For decades, I’ve listened to evangelicals demand war, promote war, applaud war, wish for war and even pray for war. I know what I’m talking about. I cannot count the number of times I’ve heard evangelical “Christians” say things to the effect, “If it was up to me, I would bomb Iraq, Iran, Afghanistan and Syria off the map. If I could, I would kill every Muslim in the world.” Don’t tell me I’m exaggerating. I’ve heard it over and over and over. The hearts of evangelicals are filled with war. Donald Trump’s war fever literally makes evangelicals stand up and cheer.

This is why evangelicals love Donald Trump: In thought, word and deed, they are just like him. And his love for money, his hatred for Muslims, his maniacal devotion to Zionism and his lust for war make him more than a President; he is a god-like figure to them. Which brings us to this: If Trump wins a second term and is able to bully, berate, browbeat and batter his way into suspending the Constitution in order to make himself President for life, these same evangelicals will love that too.