WILL CHRISTIANS ESCAPE THE WRATH OF GOD?

“For God has not appointed us unto wrath, but to obtain salvation through our Lord Jesus Christ…”

Somebody needs to tell the thousands of Christians being slaughtered around the world that they have somehow misunderstood the Gospel. Because of the murderous global rampage of Islam and the great fruit of the “Arab Spring”, head-chopping, stoning, and “assault weapon” fire have been the “blessings” that the Christian God has bestowed upon His people outside “the garden” of America.

It is so sad…so unnecessary. If only those outside of this nation had been able to sign up for the American Gospel, none of this would have happened to them. Unfortunately, they have not had the opportunity to sit under the feel-good teachings of some of America’s most “anointed” preachers. If they had been able to, they would certainly not have had to endure the slaughter of their family and friends; especially by those who are adherents to the “religion of peace” that is so prevalent in the Middle East and the continent of Africa.

President Bush told us that Islam was peaceful. So has his predecessor, Muslim-sympathizer, Hussein Obama. Hillary, Susan Rice, and most of the Joint Chiefs did as well. Did you know that CIA director John Brennan reportedly is a convert to Islam? If Islam is so peaceful, why are so many of its followers savages?

No matter how it occurred, or who is responsible for it, hell has been unleashed on Christians outside of the United States. Here, Christian persecution has not reached the death-penalty stage, but if the rest of the world is any indication, death and destruction is coming to a city near you.

It is only a “small, fanatical element” that are hell-bent on the decapitation of Christians, or so they tell us. “Fundamentalists” is the word they use: you know, the cousins of the “Christian Fundamentalists” who actually believe and follow the Bible. You just can’t trust those who play by the fundamentals…

An argument can be made that there are other belief systems that are a greater threat to Christianity in the world, but it appears that, at least right now, the sharpest swords are being swung by those who wear towels on their heads. Take a look at the bodies in this truck stacked up like a load of firewood. Someone please tell “Revs” Jackson and Sharpton that most of them are black. In fact, if President Obama had a son he would probably look like one of these former people. But I digress.

For some strange reason, the American-style Gospel has convinced a boatload of its followers that this could never happen to them because God has not “appointed them unto wrath.” In other words, if you are a believer in Jesus, nothing horrible like this will ever happen to you. Americans are special.

I guess my question would be: What was it that the poor folks in that photo did to cause the “wrath” to fall upon them? Is this the “wonderful plan” that God had for their life? If God is “no respecter of persons”, what is it that makes non-American Christians vulnerable to such terroristic Islamic-evangelism? “Convert or die” is the multiple choice quiz that many Christians around the world are forced to answer. “A” you live, “B” you die. Good to know that Islam is pro-choice. 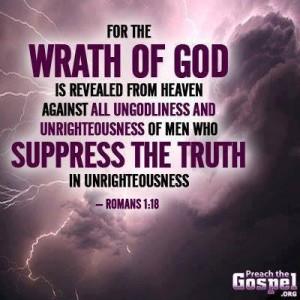 Of course, this will never happen to American Christians. God has promised us that we will not have to go through such wrath. Pardon me while I remove my tongue from my cheek.

Like so many other things in the Bible, Americans have the tendency to view everything as related to the natural world. A closer reading of I Thess. 5 will reveal that it is “eternal wrath” that the Scripture is referencing. Jesus has saved the Christian from the eternal, spiritual wrath that abides on a non-believer.

None of us has the ability to choose the time nor the method of our death. However, it is not the method of this “natural death” that the Scripture is referencing, but the reality of “hellfire and damnation” awaiting those who are not followers of Jesus. Those who have been “saved” can die a dastardly death as well. It is the wrath beyond this world that we have been saved from.

Perilous times are upon us. Blood will most certainly flow in the streets of America: streets with picket-fence-lined homes occupied by Christians. We will not escape the natural consequences of reaping what we have sown. The murder of unborn babies, debauchery, and degeneracy codified into law, the blatant rejection of the Laws of God, and the self-serving, self-centered Gospel preached from the pulpits of most American churches will not negate the consequences of America’s sin.

If ever a group of people deserved the Wrath of God, it is self-centered American Christianity.

What Gospel are you hearing in your church? Do you think that the calamity about to hit this world will exempt Christian-Americans? Has there ever been a group of believers who more aptly faced the description “having a form of godliness but denying the power thereof” than the current crop of Christians plopping on the pews in America’s churches?

Chapter 1 of Romans is an explanation of the moral depravity that has swept across North America in the past couple generations. It concludes with a pronouncement that should make every one of us shiver.

“Who knowing the judgment of God, that they which commit such things are worthy of death, not only do the same, but have pleasure in them that do it.”

That’s me, and that’s you. We have legalized and codified into law what God has called unlawful. We have given standing ovations to the vilest purveyors of lewdness.

Take a good look at that picture again. Our generation may escape this savagery, but what about our children and grandchildren? Thomas Jefferson famously said: “I tremble for my country when I reflect that God is just: that His justice cannot sleep forever.”

This has happened on our watch. God cannot and will not hold us blameless. Do we deserve to escape the consequences? How can any Christian think we are exempt from the consequences of our cowardice?

Caption: Militants from the Al Qaeda-inspired Islamic State of Iraq and Syria group take aim at captured Iraqi soldiers wearing plain clothes after taking over a base in Tikrit, Iraq, recently.